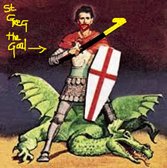 Whoever decided that the M3's league game should be at 4pm on the first weekend of the 6 Nations was a) not a rugby fan and b) not from Norwich c) a fan of the cold. Fortunately a star turn from St Gregory the goal, and a very solid defensive effort, ensured that IHC M3 returned to winning ways and whatever fire the Dragons were able to muster was quickly doused.

With the rest of the country under a blanket of snow there was some doubt as the whether the game would go ahead but in the end Tuddenham Road was relatively unaffected once the early frost had thawed; however judging by how wrapped-up the two African umpires were you would have thought the game was being played in the arctic although they had to do more running around than poor Tom in goal who was a spectator for long periods as IHC dominated, although it took quite some time for the hockey to get up to room temperature with Ipswich guilty of giving the ball away against a somewhat limited Dragons team. Eventually we realised that we needed to get the ball to Greg as our other scoring options were limited by Baz's absence on paternal duties, and once the game plan was put into action we quickly went 2 goals up with the opener created by a wonderful cross court pass from Langers that released the Belgian wunderkind Louis down the right. Louis slipped the ball to Greg, and hey presto!

The youthful central midfield paring of Adam Smith and Sampo controlled the middle of the pitch and whenever the ball came back at us it was easily dealt with by the experienced back four of Ed, Langers, Chris and the skipper. After two goals we slipped back into a lower gear and never really looked troubled to the extent that Tom in goal didn't have a single shot to save all game. The second half was desperately unexciting apart from Greg completing his hat-trick with a miss-hit and Steve A failing to score have rounded 6 defenders and the GK - twice. Truth be told it was a comfortable victory in the end with the only question being how we didn't score more goals.