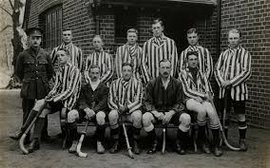 Four more goals and another clean sheet from M3s in what was close to the best team performance of the season. From front to back the team took control of the game early and whilst Felixstowe managed a brief period of pressure in the second half the final score line was flattering to the opposition as one goal was disallowed, a post was hit off a PC, and Smudge also missed a gilt edged chance for a hattrick.
With the returning wisdom of James Wrinch anchoring a midfield including Action Man Steve Askins and the evergreen Steve Hart , the team looked well balanced and quickly dominated from the first push back. Up front the skillful endeavour of Tommy Downie, Greg the goal, and Belgium's Finest Louis Vagner raided with impunity down the wings and it was surprising that it took 20 minutes for Greg to open the scoring from a deflection off the defender as he cut in from the left to meet Louis' pass. The Felixstowe keeper had already made a number of great stops but it was no surprise when Smudge took control of the ball in the D a few minutes later, bamboozled the defender, before lobbing the ball over the keeper calmly into the empty net for number 2. At the other end Jack made a superb intervention in a 2 on 1 situation as the defence of Langers and Alan was breached (for the only time in the half) but generally the wide defenders were busier supporting the attack than defending.The final action of the half was a PC where a slick return to the injecting James Wrinch was calmly flicked into the net giving the scoreline the dominance that Ipswich deserved.

The second half saw a comeback from the opposition with Jack called upon to make a few important saves from the top of the D however generally the threat from Felixstowe was limited to breakaways, most of which were foiled quickly by Alan who had a great game in the heart of the defence. Eventually after countless chances Smudge made the game safe with a cheeky flick into the corner of the net before missing his chance to buy a jug for the team. The game ended with some serious competitive showboating from Steve Askins and James Wrinch, putting their years behind then as the annoyed the opposition to the extent that the skipper ended up on his arse having been unceremoniously shoulder barged off the ball under the glassy-eyed gaze of the umpire who was thinking more about a possible G&T in the warmth of the clubhouse than the game unfolding in front of her! No name and shame Wing I promise.

Anyway a great team performance with Louis especially prominent on the right wing, supported by the marauding Taylor which allowed Smudge the chance to roll back the years. A week off to rest those dodgy knees and we resume with a trip to Watton in March when hopefully the two internationals will grace us with their presence and stories of indoor hockey in the Orient.

PS we are entering a team into the Quiz which Storm is organising - so far me, Alex and Ollie have signed up. Anyone else? Its for the little kiddies.....