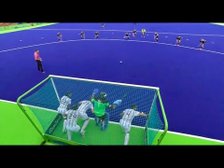 Ipswich began the game with high hopes of exacting revenge for an earlier loss where despite only having 10 players we had competed well in a 3-1 defeat. However Thetford quickly raced into a 4-0 lead with 3 PC goals including a drag flick into the roof of the net - something not often seen in this division.
With the return of Mark Davies to the midfield alongside the evergreen talents of James Wrinch and Steve Askins there was a spine of great hockey knowledge running through the midfield of the team as has become the norm. However without Greg, Baz, and Tommy we were stripped of pace and goal scoring potency , despite the best endeavours of Lewis (on debut) and Louis the now free scoring Belgian. This lack of pace was to be the undoing of the side, with Thetford racing through the gears on any turn over, and ruthlessly exposing the slightly aging defence where Sampo had called off the night before with man flu. Stretch tried to fight the rising tide but Thetford easily converted their PC chances helped by the first runner straying offside twice reducing the defensive numbers further. Luckily a 5th goal was chalked off due to height but the scoreline reflected the dominance of the opposition. Eventually we dragged one back thanks to a reverse stick shot at the far post from our own Tintin - Louis Vagner - after good work down the left from Steve and Lewis.
Some strong words from Steve Askins at half time stirred the troops and the Thetford lead was reduced further thanks to a superb PC strike by Lewis which thudded into the backboard and the teams looked much more closely matched. The remainder of the game was ding-dong with both teams enjoying possession and opportunities from PCs including one which the skipper top edged for 4 from another Thetford drag flick. Unfortunately another PC resulted in a 5th for Thetford and the game rather petered out as the full time whistle blew on another home loss.
Share via
FacebookTwitter
https://www.pitchero.com/clubs
Recent news