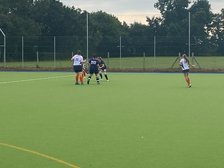 A Famous Five for the Flamboyant Fourth Team

A new-look women’s 4th team took to the Tuddenham pitch for the first match of the season against title contenders, Bury St Edmunds 5th team. The Ipswich squad had a blend of new faces and some well-known stalwarts of the club. All we’re keen, prepped and ready to kick-start the new season.

The game started with lots of passing amongst the Ipswich team with the hosts applying the pressure from the first minute on the visitors. Bury held Ipswich out for the first 20 minutes but the wave after wave of attacks began to tell. An expertly finished first for Roisin Anderson-Hurst after incredible build-up play and interpassing from the defence had Coach Foxy jumping for joy on the side-line. Five simple passes from defence, through midfield and up to the forwards was delightful for all the spectators basking in the glorious Tuddenham sunshine.

Ipswich extended their lead from a slick short corner routine in the 25th minute with Gemma Ward firing past the impressive Bury keeper. It was no more than the midfield dynamo deserved having bossed the centre of the pitch from the first whistle.

Ipswich added a third from another short corner just before the half hour mark. This time the ball was switched to the right, allowing Jane time to pick her spot finish with power and precision.

Ipswich went into the break four goals to good after an amazing attacking run from Bethan saw her play a lovely ball into the circle which was again finished off from close range by the goal-hungry Anderson-Hurst.

After the break Ipswich continued their assault on the Bury goal but just couldn’t find a way past the outstanding Bury keeper until very late on in the game.

The home side’s fifth and final goal once again came from slick passing and desire. Ward’s strong run and strike at goal was deflected in at the far post from debutant Lou who looked comfortable all game in her attacking midfield role.

Bury’s chances were few and far between. When the visitors did penetrate high up the pitch the experienced defence, marshalled by club legends Sarah Logan and Fiona ‘Jocky McJock-Jock’ Lane, stayed strong and resolute.

Keeper Claire Miller upon her return to competitive hockey after a long lay-off dealt with her one shot on target and saved admirably. Her constant communication with the team ensured a well-organised rear-guard and also a number of noise complaints from local residents.

In the post-match interview at the newly opened Tuddenham media centre, proud captain Chantelle Richards said, “It’s a great first result but also great hockey from the team and we look forward to more of this effective passing hockey! Well played all”.