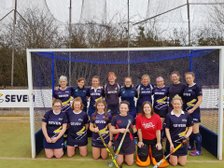 [b]Straight off the back of a bee-yoo-tiful opening game of the season last week, the Fabulous Fours (as we like to be known) went cross country and headed out to picturesque Woolverstone to meet Christchurch 2s.

Under the careful guidance of super-dupes Coach Foxy (Codename: Richard) we had only the bare 11 on pitch but happily also had quality and enthusiasm by the bucket. That said, the first half was a SLOG. The ridiculous temperatures became more and more unwelcome as Ipswich had all the possession, winning handfuls of short corners, took plenty of shots on goal but still failed to come up with the goods. Thankfully this week saw the return of long-time Ipswich player Lorna Hassell who didn’t disappoint on re-entry to the world of sticks and balls - she’s still got it folks! On the stroke of half time (or near enough) a deflected short corner strike from the top of the D finally met the backboard and broke the deadlock. The relief was tangible.

A supportively stern half time ‘talking to’ by Foxy reminded us of how we had achieved success the previous week; hockey is a passing game. We needed to make the ball do the work and capitalise on our efforts of the first half.

Thankfully these wise words hit home and the second half saw a totally different outcome. The goals soon started adding up with Lorna adding a second (another smashing top-D cracker from a short) whilst Roisin Anderson-Hurst followed suit, adding two of her own: one a cheeky short corner deflection and one a nifty little back stick flick.

However, special mention has to go to Jane Noordhuis who SMASHED home two amazing strikes from the edge of the area, both in open play. The goals were almost carbon copies of each other and left approximately zero opportunity for the defence to answer. No messing there, absolutely marvellous stuff.

(Wo)Man of Match went to Gemma Ward for a whole catalogue of reasons: storming play throughout, exceptional recruitment skills, and the ability to shake off one too many bevvies in style. Class Clown goes to none other than everyone’s favourite Captain, Chantelle Richards: “Where? The Boot? Boot?! What Boot? Did someone say Boot??”. And let’s not even mention the start time shenanigans....! (Apologies are extended to all those decent people who were trying to enjoy a civilised afternoon in THE FRESTON BOOT when the 4th team rabble descended for a sweaty celebratory drink...which was jolly lovely!)

Full of confidence and hockey love, the team look ahead to a challenging game against Harleston 6 next Saturday...can they make it three on the trot? Fingers crossed innit. Great stuff Team!!