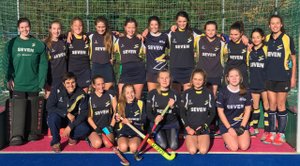 The Ipswich Seven HC U14 girls continued their winning ways with a near perfect performance away against Braintree. After the first few minutes Ipswich found their 2nd, 3rd, 4th and 5th gear, constantly increasing the pace of the game and improving in their positional play, support play and decision making. Connie Shaw injected a sense of urgency when she took the pitch as first change on the day, and was duly rewarded being on the end of a fabulous team goal, which started at left back. Issy Wilson and Kelly Smit added goals to make it 3-0 at half time. Ipswich were clinical in scoring their chances and created a good number more, seeing the Braintree GK have a good day in goal. At the other end Ipswich GK, Flora Day, had to pull out some of her best saves, well supported by Poppy Haworth-Macmillan, Rosy Fitch and Megan Bureau. The key difference between the two teams at half time being that Ipswich took their chances very well. Ipswich also dominated when pressing Braintree whereas the Ipswich defenders found their way around the Braintree press with more ease.

The second half saw Ipswich continue to dominate and build pressure, with players being rotated in positions, not allowing the opposition a chance to settle and get used to their opposite number. Anna Clough dominated the midfield, nullifying a key player for the opposition. Ipswich made good use of turnover ball and moved the ball very well, seldom getting themselves caught up in 1v1 situations. A further three goal were the result. Connie Shaw scoring her second, Ella Smith getting a great rebound goal on her birthday and Rosie Dane completing a good day for Ipswich close to the end of the match. Some great defending by Sophie Page, Heather Lane and Poppy in the last ten minutes meant that Braintree stayed unrewarded for some very good play from them too.

Welll done to each of the players. Rixie was, as ever, an inspiration to the team. Thanks to team manager Stephen Duff and to all the parents for supporting brilliantly.