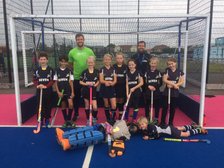 Ipswich Seven Under 10’s started the season with a SYL tournament at ISSC on Sunday 14th October. With two 7 a side teams entered and only 10 players, I7HC’s Jeunes Guerriers Bleus (Young Blue Warriors) knew they had a huge endurance as well as logistical challenge from the off. Fortunately the organisers had kindly amended the schedule so that both Ipswich sides were not playing each other or at the same time which made life easier. The Young Blue warriors however did have a daunting set of eight 10 minute games to get through and so were lucky to have Helena Jarvis, the team manager providing fantastic organisation and so it was just down to the team to perform on the pitch, assisted by Craig Wiid and Robin Swindin as coaches and coaching umpires throughout the morning. Ipswich Seven was made up of some experienced campaigners such as Emilia Noordhuis who was pivotal throughout the day as the midfield general and Barnaby Greet-Smith providing drive and dynamism while they also had “youth” in Alex Swindin at 6 years old playing up an age group for the first time and Tamzin Steel in her first tournament. They had defensive steel in Sadie Leather, Ivy Duff (both of whom tackled and passed well from the back) and Alex Horsfield Burton (who also proved a useful source of goals when required), and goal scoring threat up from with the free scoring duo of Lillie-Mae Chisholm and Alva Holmefjord Phillips.

Ipswich started against BSE B and to the teams delight, immediately registered their first win with a 3-0 victory. They were then brought down to earth against BSE A and Sudbury A who both had some very skilled and older opponents but they fought hard in both 1-0 loses and they could have nicked a draw against Sudbury at the death, missing two good chances. The Blues were back to winning ways, beating BSE C 5-0 and Felixstowe B 3-0. A tough game followed with Felixstowe A, losing 2-0 to the larger side but again, everyone got stuck it and defended bravely and attacked with invention, with Fraser Jarvis having a stormer in goal. Les Guerriers Bleus finished their endurance test with two matches against the hosts, IES B and finally IES A and they finished in style with a 4-1 and 3-0 wins respectively.

It was a tough but enjoyable morning with Les Jeunes Guerriers Bleus surprising themselves and delighting their coaching team and management, parents and fans in equal measure and playing some wonderful hockey and with much still to work on, we hope they can improve and play even better (as well as enjoying themselves and having fun), hopefully at the next SYL tournament in Felixstowe on the 11th November.

Thanks must go to all the parents for their support and encouragement throughout, Helena Jarvis for managing on the event brilliantly along with overseer and head honcho Chris Clough. Also a big thank you to Craig Wild for his coaching throughout and made an immediate positive impact and I hope he will build on this and help this group improve still further. Finally, but most importantly, thank you and very well done to the Guerriers, who never gave up, and made the day very rewarding for the managers, coaches and parents alike, and so a brief pen picture of each of the team from the mornings events:

Fraser Jarvis (goalie) – fantastic in goal against some powerful shots and a bright future awaits
Sadie Leather – determined defender (she didn’t want to play anywhere else) and also happy to put the coaching team in their place
Emilia Noordhuis – a leader on the pitch with steel alongside considerable skill
Alex Swindin - the young pup showed he can step up and made a big impact with his dribbling and vision
Alex Horsfield Burton – fantastic in defence and happily strolled up front to score when we needed a goal
Barnaby Greet-Smith – the engine room of the team, getting us going forwards
Tamzin Steel – skill and guile (with a smile) and a real bonus to have in the team
Lillie-Mae Chisholm – couldn’t stop scoring – in the right place at the right time – glad she was on our team on Sunday!
Ivy Duff – commanding defender and also happy to rip into the coaches when she had a mind to. Great distribution from the back
Alva Holmefjord Phillips – another goal scorer who was everywhere up front. Her “whoop” of joy when she scored certainly showed her passion to play (also needs a bigger pack lunch for the rest of the team and coaches next time)