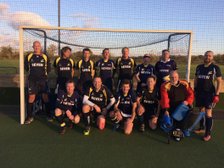 After a number of years without entering the Over 40’s Cup, Ipswich put up a spirited performance against Harleston in the first round but in the end came up short, losing 6-3.
Ipswich were off the pace in the first 5 minutes giving away cheap ball which lead to sustained pressure, resulting in a penalty flick being given for Alex Fletton being hit on the line. The flick was appallingly taken but did enough to wrong foot Nick Bignell in goal and the ball dribbled over the line after about 5 minutes, much to the joy of the home side (and expletives from Ipswich). Ipswich weathered the initial home storm with good last ditch defending from Fletton and good work from custodian, Bignell and the Blue Army started to put some moves together themselves with Andy Cutting and Kevin Page working tirelessly up front and Oli Pipe and Ed Downie rampaging down the right, with a move between Downie, Pipe and Carl Parkes winning a series of short corners with the Captain Robin Swindin demanding the strike.

Fortunately he did manage to spack one short directly, beating the logging keeper between his legs to hear the rattle of the Rio backboards, leveling at 1-1. Although Ipswich continued to make progress with the skillful Richard Rutterford repeatedly out foxing the Harleston defence and releasing Parkes, Page and Cutting, Harleston’s quick breaks and some wayward distribution allowed the home side to rack up 3 unanswered goals before half time, one of which, an upright reverse stick hit which gave Bignell no chance, the scorer would not be able to recreate again in a thousand lifetimes.

The first half had been full of endeavour with some courageous and at times desperate defence, with Ant Harper diving at his opponents feet in the D to clear the danger being a prime example, but in order for the flood gates not to fully open, Ipswich would need to up their game and this they did. With a vastly experiencesd back line of Richard Langton, the youthful legs of Alex Fletton, the wonderful work of Mark Davies and Bobby Gaffer rolling back the years, Ipswich went for it in the second half. Ed Downie moved to the front line and used his skills to great effect and with the midfield now getting to grips their opponents, Ipswich got a goal back with Swindin attempting a tomahawk with thankfully fell straight into the path of Cutting who cooly finished from close range. With this pressure however, Ipswich left themselves open to the counter attack and from one of these, the speedy Harleston attack managed to score with a ball over the top somehow wrong footing Fletton and Bignell for the Harleston forward to score into an open goal.

Ipswich however didn’t stop pushing forward and won more short corners. From one of these, a slick move, directed by Parkes, left Swindin in front of goal and he flicked it over the diving keeper to make it 5-3. Swindin was however soon to get his marching orders after a trademark late tackle left him with a yellow card and 5 minutes to consider his navel. To make matters worse, the resulting short corner was dispatched by the Harleston skipper to make it 6-3. With only 10 men, Ipswich showed true grit and besieged the Harleston D and great work from the versatile Harper, now marauding up front with Page and Cutting continued to create chances and win corners and from one of these, Ipswich though they had scored a 4th , only for the Umpires to disallow the goal after conferring. Just after this, the final whistle went with Ipswich losing but having learnt some valuable lessons and knowing they can compete in this competition. With excellent performances by Rutterford, Pipe, Parkes and Downie, with the rest of the team putting in a good shift, there is more to come from this mature Ipswich team and they will see what more is on the 26th November when they compete in the Plate competition.

The final word will be from the disiplnary committee who will be disappointed by Swindin’s Yellow card this this could hit him in the pocket come the 3’s night out!