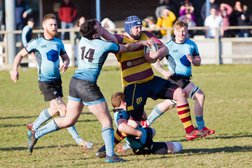 YM Overcome Woodbridge for a Place in the Cup Final

YM travelled the short distance to Woodbridge on a sunny Spring afternoon that was ideal for some fast running rugby.
However, despite YM having the majority of possession and territory in the opening 5 minutes, Woodbridge were able to counter effectively and exploited the spaces within YM's defensive line.
This lead to an unconverted try to Woodbridge when then game was only a few minutes old.

Undeterred, YM were trying to play quick ball rugby but were being let down by some handling errors. Once again Woodbridge scored on the break bringing the score to 10:0 after 20 minutes.
A positive that YM could take from the half was that their scrum was becoming increasingly dominant over Woodbridge despite Woodbridge's weight advantage.

During the break YM made some substitutions to provide more forward momentum to the central line breaks and to sharpen up the defence.
These changes plus the guidance from the coach at half time immediately put YM on the front foot where pressure produced a penalty within kicking distance.
Harry opened YM's account from the resulting kick to bring the score back to 10:3.

Ben Hockley and Kaselle Lee were proving to be a real handful for the Woodbridge defence and further pressure enabled Kaselle to cross the whitewash for YM's first try.
Unfortunately this wasn't converted but at 10:8 the game was swinging back towards YM.

More work from the forwards brought the play to within two metres of Woodbridge's try line where a series of pick and drives were repeatedly repelled by the Woodbridge defence.
Finally, YM did cross the line, only for the ball to be held up.
However, Ipswich knew they had the upper hand in the scrum and proceeded to push Woodbridge backwards over the try line. The ball was dotted down by a jubilant Kaselle and converted by Harry to push YM into the lead with the score at 10:15.

Woodbridge's backs were still sprightly and were causing YM to make a number of crucial tackles. More direct running from YM yielded another penalty though, which brought the score up to 10:18.
More importantly, as the game was entering it's final stage, YM were leading by more than a converted try.

When the final whistle blew, YM had won the game 10:18 despite being 10:0 down at half time.
The push over try and some great defending can be seen on this video: Woodbridge v Ipswich YM