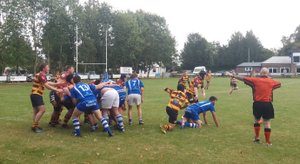 Diss rugby club was the venue for this pre-season warm-up match played in autumnal sunshine.
Played over four quarters, the match began with early pressure by Diss and a series of errors committed by the travelling team allowed Tom Webster to cut through the defensive line for the first score, which went unconverted. 5-0

YM gained their rhythm and composure during a more balance period of play that followed and good work at the base of opposing scrum saw YM scum half, Simon Arnold, displace the ball from his opposite number resulting in a penalty for the visitors. Kicking for a line out saw control with YM and a catch and drive saw hooker Adam Sawyer cross the line for YM's first score. 5-5

Diss brought the game to YM for a sustained period of attacking play, however YM dealt with the pressure and took the game back into the Diss half with the home team being penalised for going over the top. An injury to YM's Brandon Morris from the resultant action meant he had to leave the field.

At the beginning of the second quarter Diss were awarded a penalty inside YM's 22 and a quick 'tap and go' saw pressure on the visitors defensive line. A dummy pass and off load to supporting Ed Pasmore resulted in the home side's second try. 10-5

A good spell of play by the visitors in response saw a chip through to bring about a Diss line out within the home teams 22. An airborne Matt Brocken for YM, frustrated the Diss put in and the visitors regained possession, however Diss held firm to snuff out the attack.

An impressive move from YM's own half was initiated by YM's forwards penetrating the gain line and saw quick ball released initially to Josh Ryan, who used the support of Barney Horsfield to gain ground into the opposition 22 and provide the final pass to flying winger, Marcus Lockwood to score close to the opposition posts. This was duly converted by Barney Horsfield to put YM ahead at the close of the quarter. 10-12

Immediately responding to club coach, Clive Bell's direction, YM returned the Diss kick off and Corey Parfitt ran through the approaching defensive cover to score under the posts. Barney Horsfield provided the additional points through the conversion. 10-19

Diss responded with sustained pressure capitalising ultimately on a YM error that allowed forward Pete Bray to close the leaders to a four point advantage. 15-19

Building on a swing in play, the Diss team gained control of a loose YM pass to provide a short exchange creating space for Jake Girdlin to go over for Diss to take the lead. 20-19

In the final minute of the game YM pulled off a training ground move in the back line to allow for Corey Parfitt to score the final converted try of the match and gain victory for the visitors. 20-26