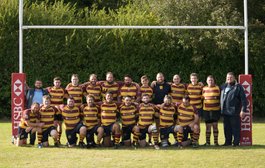 A disappointing result but the outlook remains positive

On Saturday 21st September 2019 Ipswich YM's first home league match was played in sunny and warm conditions on a well irrigated surface at their ground at The Street, Rushmere.

Immediately from the kick-off YM took the game to their visitors and within 3 minutes Barney Horsefield produced two successive breaks through the defensive line to impressively go over for the first score, which he also converted for a 7-0 lead.

The Ely players responded with pressure causing the home side to deliver some strong defensive work, of note Will Davis tackled well, however Ely gained a penalty which was sent wide of the uprights but this gave an indication of the visitors intentions.

Possession was soon again with the visitors, when after 13 minutes counter rucking produced a breakthrough for a route one move where flanker Scott Macfarlene crossed YM's line for their first converted try to pull the scores level at 7-7.

With 27 minutes on the clock, YM pressure led to a lineout deep into the Ely half where stout defensive work from the visitors saw a long clearance which the Ely players chased. A ruck ensued where YM again lost valuable possession through Ely's strong counter rucking and Alfie Ranswell carried over the home team's line to go ahead at 7-14, having added the conversion.

Ely added to their tally through two kicked penalties awarded by referee Ryan McAlister as a result YM offending at the scrum and 5 minutes later for holding on, the score now 7-20.

In the final minute of the first half YM applied pressure and camped in Ely's half. A Calton Ford chip through down the right wing gave YM possession at the lineout which resulted in a feed to James Tabor to score an unconverted try. 12-20.

Within 2 minutes of the second half restart Ely added a further unconverted try after a string of passes through the back line released Oscar Edwards to go over in the corner, making the score 12-25.

A surging run by YM's Will Davis broke a period of stalemate and the home team gained a scrum from where No. 8 Kaselle Lee picked up from the base and drove on. YM awarded a penalty inside the opposition's 22, chose to tap and drive the ball into the Ely defenders which was released to Corey Parfitt who went over in the corner to reduce the deficit to 17-25.

Ely struck back 13 minutes later after winning YM's ball from the home team's scrum and releasing players to carry the ball down the blindside for an unconverted try by James Buckland. 17-30

Almost from the restart Ely maintained momentum and having broken the YM defensive line supported each other well to cross over the try line close to the posts for a score by Ryan Clark which was converted by Charles Coupland to extend the lead to 17-37.

YM continued to battle and pressurised the visitors in their 22, however a handling error gave Ely possession and through good handling and close support the ball was worked back up the pitch to where Grant Storey went over for Ely's 6th converted try to lead at 17-44.

In the dying minutes of the match after excellent tight driving maul work, YM's Chad Hervey topped an outstanding performance by providing the ball to Wes Chetty to score a try and secure a valuable bonus point for the 4th home side try.

After the game both teams congratulated referee Ryan McAlister (Suffolk Referees Society) who had controlled the game well.

Player of the week awarded to Chad Hervey - £25 credit at the bar.