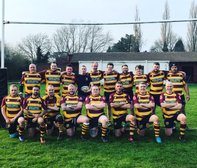 Both teams were down in numbers but this made for an open, high scoring game

Despite both teams only being able to muster 12 players for this match, everyone was up for a game of rugby and the shortfall didn’t really affect the quality of the contest.

YM were soon in the lead and this was a position that they held for all of the game.

However, Colchester were powerful in the tight and due to the space available, often made yards when using blindside runners. These tactics produced a purple period during the first 20 minutes of the second half where they were only one score away from YM.

This pressure wasn’t sustained though and YM’s rapid backs took full advantage of a tiring Colchester side in the final quarter to finish the game 55-22.

Thanks to Colchester V for making the trip down the A12 and creating a game that was a great advert for grass roots rugby.