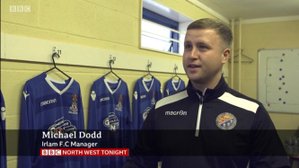 We can announce that Irlam FC manager, Michael Dodd, has decided to step down from his position ahead of the upcoming 2021/22 season.

After 9 years of week-in, week-out service; personal commitments over the next 6-12 months have meant that Michael has had to make the tough decision to step away for the time-being.

Michael started out at the club in 2012; taking on the position as Reserve Team Coach, before being promoted to the Reserve Team Manager's role the following season. 2 cup finals that year saw the team lose out on penalties at AFC Darwen, before securing the NWCFL Reserve Division Trophy with a 2-1 victory at Glossop North End in the final game of the season.

Michael would soon move up to the first team coaching staff and worked alongside Steve Nixon, as first team coach in the 2015/16 promotion season, achieving almost immediate success as we secured Premier Division status with a 2nd placed finish in Division 1. The following season saw us finish in 8th position in the Premier Division, before Steve Nixon stepped down and Michael gained the position of first team manager prior to the 2017/18 season.

Since taking over; clear highlights include the FA Vase run in 2018/19 in which we reached the last 16 stage, a new club record. A famous 4-0 home victory in the last 32 against Cadbury Athletic was followed up with defeat at home to eventual winners Chertsey Town. The team had us dreaming of Wembley.

That same year we reached our furthest ever point in the FA Cup; bowing out 2-1 away at Newcastle based side Dunston in the 2nd Qualifying Round, after famous wins at Prescot Cables and Runcorn Town. We equalled this achievement in 2019/20, Dodd's side reaching the same stage again after a huge win away at Stocksbridge Park Steels. This culminated in a huge home tie against York City in front of the BBC cameras. A 2-0 defeat came secondary to seeing nearly 1,000 spectators fill the stadium, on a day which really brought our community together.

After a superb start to the 19/20 league campaign in which the side lost just 1 of their opening 17 league fixtures, playing some of the best attacking football we had seen at the club for many a season, COVID would arrive to cut the campaign short, as the team were on track to equal their highest league position.

A rebuilding job was done by Michael in the summer, with a new, fresh, young squad assembled at the RG3 Digital Stadium. A landmark victory in the FA Cup again against Yorkshire-based Liversedge, a dramatic shootout win at Emley in the FA Vase and a victory in the league with 10 men against 1874 Northwich would prove to be the final highlights, in what was a short season for Dodd and his players this time around.

"I am genuinely gutted to be stepping away from the role, but I have to take the break for myself at this time." said Michael. "Telling the players has been strange, a little bit emotional and I can't thank them enough for the messages and phone-calls I have received since making them aware of my decision. Some of these lads have been with me for the whole 9 years! I'd like to thank every player and staff member who has been a part of my time at the club. I feel extremely lucky to have made the memories I have done in this role, as well as to have met and worked with the people I have done, many of whom will be friends for life. I hope to enjoy being a fan for a little bit, supporting the next manager and watching this group of players push on."

We can't thank Michael enough for the pure dedication and commitment he has shown whilst in the role. Always first in, last out on training nights and matchdays - he really has lived and breathed the role. The club and the squad has been left in great shape and everything is set for us to keep moving forward.

We hope to make a statement shortly regarding the vacant position.