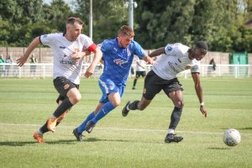 No way through..Icely tussles with the Avro defence
courtesy of Avro FC

IRLAM FC'S early season struggles continued on Saturday as visiting opponents Avro FC ran out convincing 4-0 winners on an afternoon of disappointment as IRLAM exited the FA Cup at the first hurdle.
Avro's early dominance of the game resulted in the home side being pushed deep into their half in the early moments.
As soon as 4 minutes saw the deadlock broken, a floated in free kick that saw Avro's Ethan Sutcliffe time his run at the near post to head home convincingly for a one goal lead.
On 18 minutes IRLAM would fall to another set piece, this time a corner, Avro centre half Geffry Ebhote up first to head home from six yards to give Irlam a mountain to climb so early in the game.
A third goal would follow, run in from the left side this time would see a run into the box from Avro's Cottril resulting in the player being brought down for the easiest of penalty awards, duly dispatched to make it 3-0
An early second half dismissal for Irlam's Millen Brown would neatly sum up the home sides afternoon, and when White was wrong footed by a ball into the Irlam area , Cottrell was on hand to put the finishing touches to a perfect day for the visitors.
For IRLAM'S part, key players missing on the day and a run of difficult games at the start of our campaign means the side are playing catch up.
A stronger side should hopefully be making the trip to Squires Gate this coming Wednesday