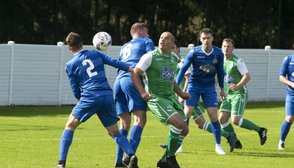 IRLAM BOOK THEIR PLACE IN THE NEXT ROUND

IRLAM FC had a day to remember as the side equalled their furthest run in the famous competition, giving them a great chance to go one further in the next round. A 4-0 victory against Charnock Richard, a strong and well organised home side, was no fluke as IRLAM, with the exception of a tricky period mid-2nd half, dominated proceedings at Mossie Park on a glorious sunny afternoon.
The game started quickly with a host of chances, Irlam forcing a corner immediately, cleared away whilst at the other end Charnock would head over a half chance. The first big chance fell to Southworth, the Irlam winger hitting the post on 7 minutes, whilst Nicholas pushed into the Charnock area only to be crowded out in the last second
The deadlock was broken on 15 minutes, Irlam’s Callum Nicholas again finding space in the Charnock area, only this time his passage to goal was blocked illegally for the award of a penalty. Irlam centre Karl Cassell was on hand to stroke the ball into the bottom corner, the Charnock keeper guessing the right way but unable to do anything as Irlam opened the scoring.
On 22 minutes Irlam full back Dylan Meredith picked out Perry, a ball that dropped onto the Irlam wingers boot only for Perry to fire straight at the keeper, a real let off for the home side.
On the 30 minute mark, Irlam keeper Lee White was tested for the first time, a low drive from Charnock stalwart Grimshaw, the shot pushed just wide of the Irlam goal. Buckley replied at the other end, a strike from a tight angle hit the side netting when everyone thought it was in, followed up by a low drive that went just wide.
The second goal would come on 36 minutes, a sweeping move from back to front for Irlam as Nicholas collected the ball deep in the Irlam half before whipping a ball into Perry, the Irlam wingers ferocious strike only parried by the keeper into the path of Buckley who slammed home Irlam’s second of the game as both teams went in for the HT break.
The second period started with a real chance for Southworth, the Irlam winger nearly capitalising on a moment’s hesitation by the home keeper that nearly led to Irlam’s third.
The home side would enjoy a decent period of possession midway through, playing good flowing football that saw Irlam’s midfield pairing of Doyle and Morrison dropping deeper in front of the Irlam back line, a tactic that allowed Irlam to ride the storm as the score remained 2-0.
On 75 minutes, the home sides efforts would be their undoing when Irlam full back Zach Dulson moved up the right unchallenged before finding Southworth, the Irlam forward fashioning enough time and space to fire a 25 yard strike past the Charnock keeper for a 3-0 lead.
As the game entered its final phase, Irlam produced a fine team goal to settle the tie, Jordan Buckley, this time collecting a ball down the left, would unselfishly square the ball into the path of Perry who fired home from a tightening angle to make it 4-0 on the day and book Irlam’s passage into the next round.

What the managers said.
Charnock manager :
4-0 flattered Irlam as we had most of the possession throughout the game but a key decision that went against us really dented our rhythm. Saying that, Irlam took the chances they got and punished us.

Irlam manager Michael Dodd :
We are delighted to match our club record achievements from last season; getting to the 2nd qualifying round once again. It is a testament to the players' efforts on the pitch and all the work from everyone behind the scenes. It is a great day for the whole club. It sounds obvious but our players were brilliant again. To win 4-0 away from home at this stage is such a strong statement.