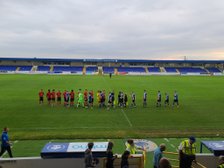 Players shake hands ahead of the fixture
A first half display full of determination and character would suggest that IRLAM's U18's can look forward to an exciting campaign ahead this season, but an early exit in the FA Youth Cup was handed out by a strong and well drilled Chester academy side, Irlam going down 4-0 on the night.
Irlam keeper Jaylan McCaffery was in excellent form early on in the game,called into action as soon as the 2nd minute to save well with his feet, a feat that was repeated on 18 minutes when the Irlam keeper would turn another shot around the post for a corner as IRLAM kept their hosts shut out.
Irlam, neat in possession and not short of willingness to win the ball, would certainly match Chester's commitment, but pressure was beginning to build.
A misplaced pass on 35 minutes as Irlam moved forward let Chester in, and a quick run on goal would create panic in the Irlam area,leading to a player being brought down for a penalty, duly converted by Chester Skipper,Daly.
To Irlam's credit the players would hold firm until the break, with just the one goal lead intact for the hosts.
The second half would give Irlam no chance to settle as Chester doubled their lead from the kick off. A ball around the Irlam area seemed to be waiting for an Irlam defender to clear away, but indecision set in and Chester's Daly took his chance as he whipped in his second of the match.
Irlam manager Paul Bird would start to make changes as the team looked to get a foothold in the game, but a well worked corner from Chester on 55 minutes was headed home to make it 3-0.
Just past the hour mark Chester would put the game out of reach for Irlam as they fired home their fourth, Irlam's players paying the price for their efforts in the first half. To Irlam's credit, the scoreline would not alter, and the last 30 minutes of the game was played out in a good competitive manner, the final whistle recognising Chester as much the better side on the night, whilst also noting the work rate and commitment of Irlam's young players.
Share via
FacebookTwitter
https://www.pitchero.com/clubs
Recent news