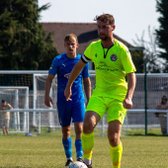 Irlam's Louis Holt looks on
Photo courtesy of Marc Gibbs
IRLAM'S difficult start to the league campaign would continue at the weekend as two
second half goals from Vauxhall Motors FC ensured the three points left along with the visitors at the end of a brutally hot day at the RG3 Digital Stadium.
A fairly even 1st half saw Irlam with the early chances, and when Irlam forward Saul Henderson got the better of his marker around the Vauxhall penalty area, the strike on goal looked unstoppable but would unfortunately rise at the last second to whistle over the Vauxhall goal. Soon after, a whipped in cross found the head of Louis Holt, the Irlam forward glancing a header goalwards, but with too much of an angle to work with the effort would again go behind the visiting goal.
On 14 minutes a panicked back pass in the Vauxhall penalty area would give Irlam the chance of an indirect free kick, but again an early chance would go begging as Sterling struck the ball well enough,only to see the Vauxhall defence hold firm.
On 28 minutes Irlam keeper Ogden would save well with his feet to deny Buckley, and Vauxhall their first chance of the game as the half would end with neither side making inroads into the scoreline.
The visitors would start the second period with more urgency, Ben Holmes flashing a shot wide, and on 58 minutes Vauxhall would break the deadlock. A move that initially threatened little would prove decisive as Vauxhall's Michael Burkey moved down the left unchallenged before squaring the ball to an unmarked Jordan Deer around Irlam's penalty area, Deer with time to pick his spot and put the motormen in front.
A host of changes from Irlam tried to inject urgency into the game as Irlam went in search of a reply, but on 75 minutes Vauxhall would put the result out of reach as they found a second goal, an error strewn attempt to play out from the back for Irlam saw them pay a high price as Buckley stole the ball away and fired home unchallenged, a frustrating goal to concede at any level.
In a game of few chances, punctuated by the hot weather and stoppages for water breaks, it was Vauxhall who would emerge with the 3 points, giving IRLAM more work to do as they prepare for the trip to Lower Breck on Sat 20th August
Share via
FacebookTwitter
https://www.pitchero.com/clubs
Recent news