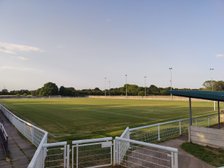 DISAPPOINTMENT FOR IRLAM ON OPENING DAY.

A low key performance for Irlam provided disappointment for the home support on Saturday as they went down 3-1 to Wythenshawe Town in an error strewn game.
The game began with Irlam immediately pushed back into their half as Wythenshawe looked for an early opportunity in the game, Aaron Dwyer nearly on target for the visitors as Irlam looked to get into their shape.
The pressure continued up to the 20th minute, and when Irlam failed to clear their lines around their goal, an under hit clearance into the path of Wythenshawe's Max Leonard would allow the visitors the easiest of openers from 5 yards.
On 37 minutes, Irlam midfielder Oscar Campbell struck a 40 yard ball goalwards that had the Wythenshawe keeper beaten, only for the ball to nestle on the top of the net, half of the crowd thinking it was in !
Two late chances in the half would fall to Irlam; Mitch Henry was denied as the keeper was quick off his line, followed by a chance for Irlam no10 Millen Brown, the ball just nicked off his boot as he as about to pull the trigger, the first half ending one nil to the good for the visitors.
The second period began in similar fashion to the first,Wythenshawe piling men forward, both Dwyer and Bryan with decent chances early on.
The 54th minute saw one of Irlam's best opportunities to get back in the game, a neat through ball into the path of Irlam winger Mitch Henry saw the number 7 with just the keeper to beat, but the split second delay in where to put the ball resulted in Bywater in the
Wythenshawe goal saving bravely, the ball hitting the no1 square in his face.
On 54 minutes the ball would end up in Irlam's goal after a mix up in defence would see Wythenshawe get two bites at the cherry inside the Irlam penalty area, Byrne's shot deflected into the feet of an unmarked Dwyer who fired home, again a goal conceded from 5 yards to make it 2-0.
On 75 minutes Irlam's chances of getting back into this game would disappear, Irlam keeper Lee White coming out of his area to clear the ball, only for the ball to go to Jordan Burton, the Wythenshawe substitute whipping the ball back and over a retreating White and into the Irlam goal as Wythenshawe put the game out of reach.
The bright spot of the afternoon came in the form of Irlam forward and substitute Louis Holt, a neat through ball that saw Holt calmly go around the keeper to slot home to make it 3-1 and get us on the score sheet. Holt would also try his luck at the death, a whipped in free kick that would have promised much more but for a deflected block that meant the chance would come to nothing.