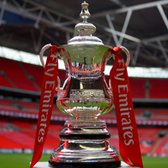 FA CUP
IRLAM FC will begin its FA Cup campaign on home soil this season as we welcome fellow NWCFL Club Ashton Athletic to the Ambitek Stadium.
The Extra Preliminary round of the competition will take place on Saturday 10th August.
The draw for the next round, the Preliminary Round has already taken place.
The winners of our round against Ashton Athletic have been drawn away at Sheffield based, Evo Stik South-East Club Stocksbridge Park Steels FC. This fixture is scheduled to take place on Saturday 24 August.

FA VASE
Our fantastic success in last season FA Vase campaign has seen us pushed up the rankings for this season competition. As a consequence we are exempt until the 2nd round proper of the competition, entering at the real sharp end of the FA Vase. Fixture schedules will be announced once earlier rounds are completed.

FA YOUTH CUP
Week commencing the 2nd of September signals the beginning of our U18's FA Youth Cup adventure. We are drawn at home in the Preliminary Round of the competition as we face Mossley FC.
The draw for the next round, the First Round Qualifying has already taken place. The winners of our round against Mossley will again be given a home draw, against the winners of Southport v Wythenshawe Amateurs
This fixture will take place W/C 16th September.