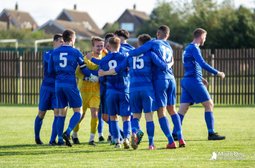 A large, noisy crowd , a very good side and a sloping pitch that the home side should know better than anyone would still prove to not be enough for 1874 Northwich as Irlam once again, as last season, grabbed the 3 points away in an exciting fixture at their Townfield base.
The home side will certainly be one of the favourites to succeed this season,and if the previous season had completed they would now be plying their trade in the Bet Victor West Division.
This would all count for little on the day however as goals from Nicholas, Ledson and Bardsley-Rowe would prove just enough to get past 1874 and claim a 3-2 victory on a dry and breezy afternoon.
Aside from a quick effort from 1874, a ruled out offside goal, the real action would appear at the opposite end of the pitch with just 5 minutes gone, Irlam wide man Max-Bardsley-Rowe would get the better of his marker down the right before whipping a cross into the 1874 area, an inch perfect ball that was met by the arriving Callum Nicholas, the Irlam forward volleying home what would be the goal of the afternoon to open the scoring.
Nicholas would nearly double his tally minutes later when he pulled a shot just wide, the 1874 keeper scrambling low down to his near post to see out the danger.
The home side would level things up 24 minutes , a penalty out of nowhere for an alleged handball, confidently given by the unsighted official saw Matt Wooley step up to confidently convert to make it 1-1.
On the half hour mark Irlam were dealt a blow as the home side turned the tables, taking the lead as Harry Cain finished off a neat move from 1874 with a whipped in shot that beat White hands down in the Irlam goal.
The lead would not last long however, and the spectators were treated to their fourth goal of the half as Sam Oliver whipped a corner in for Irlam to find skipper Ryan Ledson who was first up to the ball to confidently head home the equaliser to make it 2-2. A couple of late chances in the half were shared out between the teams, Malumo getting in a great position