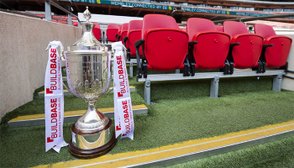 IRLAM BOW OUT OF THE VASE AT THE 1ST ROUND

Despite a successful set of qualifying rounds, and what looked like a favourable home draw against North East side Seaham Red Star FC , Irlam would suffer a premature exit from the FA Vase on an afternoon when the visitors were out of the blocks quickly, and would ultimately prove to be worthy winners against an Irlam side struggling with the absence of key players.
Seaham started brightly, early possession leading to early tests for the Irlam defence as a couple of whipped in crosses were dealt with as the game quickly got underway.
Irlam would see some opportunities down the right, Bardsley-Rowe was in a couple of times to put the ball into the Seaham area, Irlam skipper Ryan Ledson on the end of one effort only to head just wide of the visitors goal.
With just over 30 minutes gone Irlam were dealt a crucial blow as centre half Karl Cassell was forced out of the game, a clash of heads that would ultimately lead to concussion for the defender, a loss that would prove costly at the heart of the Irlam defence against a physical Seaham side.
Cassell was replaced by Ales Francis, and it would be Francis who nearly made an immediate impact as he fired just wide of the Seaham post, a real chance as the score remained goalless.
With five mins to go to the break, Irlam would have a couple of real chances to get in front. A whipped in free kick from Nicholas on the edge of the area would be agonisingly cleared away, whilst soon after Bardsley -Rowe went close with a long range drive that sailed just over the visiting goal.
However, on the stroke of half time, Irlam would find themselves a goal behind, a real sucker punch as the Seaham forward found time to turn and fire low past a stranded White in the Irlam goal from five yards for the most disappointing of goals to concede.
No sooner had the second began Irlam found themselves 2-0 down, Indecision in the last quarter of the pitch would ultimately lead to possession lost would lead to s straight run on goal and score, another gift for the visitors as Seaham celebrated an unexpected two goal lead so early in the game.
The goal clearly deflated the home side, and despite the urging from the dugout, the loss of Cassell at the heart of the defence, and the continued absence through injury of Irlam striker Connor Martin would give Irlam fewer options to spark a revival in the game, Malumo and Campbell had chances to convert as the game ran on, and Irlam substitute Derbyshire went close as the keeper was quick off his line to thwart the Irlam forward as the two goal deficit remained intact.
With minutes left on the watch, Seaham nearly made it three, a lifted long shot caught White out of his goal, a spectator as the shot dropped over the Irlam keeper only to strike the bar, the one bit of luck Irlam would have all afternoon as the final whistle saw the team bow out of the FA Vase for another year.
Share via
FacebookTwitter
https://www.pitchero.com/clubs
Recent news