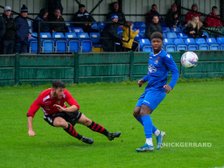 IRLAM BATTLE AGAINST THE ODDS TO SECURE THE POINTS

Down to ten men after 15 mins, the worst conditions anyone could remember in a long time, a 2 goal lead reduced in the last minutes to 2-1...this game had everything and more and showed that you dont need to be at a Premier League ground to enjoy the thrills and spills of the beautiful game.
Irlam showed true grit to post a deserved win with a battling display to emerge 2-1 winners against Charnock Richard on a day of torrential rain, that some thought may have been abandoned at some points in the game.
Goals from forwards Milan Thompson and Mwiya Malumo would give Irlam a 2 goal lead with ten men, the gap reduced to 2-1 with the award of a late penalty for the visitors.
Early chances fell Irlam's way as Thompson nearly opened his account after just two minutes, followed up by a whipped in cross from Nicholas that edged just wide of the far post as it went through a sea of players in the area.
At the other end Haydock saw his chance go just wide as Irlam needed to be on their guard against what is always a very good Charnock side.
On the quarter hour mark Irlam were dealt a real blow, Irlam full back Eoin Charles arrived late in a challenge against Nickeas,a slip as he went for the ball making the challenge look worse than it was. Despite the Charnock player showing no ill effects and back on his feet immediately, the official showed the red card for dangerous play. Irlam were now faced with the prospect of playing with ten men for 75 minutes, the score still level at 0-0. A short period of resetting for Irlam, would see Charnock have just one effort on goal, Grimshaw tamely firing straight into the hands of White, but on 28 minutes Irlam would turn the tables as they took the lead. A long range strike from Irlam full back Lever looked a simple enough situation for the Keeper, but terrible conditions and a spinning , wet ball proved difficult to handle as the shot was dropped , into the path of the waiting Thompson who volleyed the ball home to give Irlam a deserved lead, an advantage they would carry into the break.
The second half started with excitement at both ends of the pitch, an immediate chance for the visitors saw a header goalwards find the crossbar and away, whilst on 51 minutes Malumo would find himself with just the keeper to beat, but with too much time to find the target, the chance would disappear as Jones in the Charnock goal made a fine save to deny the Irlam forward.
On the hour mark Irlam forward Callum Nicholas created space to shoot, although the Irlam no10 elected to switch the ball to Malumo at the last second instead , the final pass falling foul of the offside flag.
Charnock would have a chance moments later, a whipped in shot that was seen out warily by White in the Irlam goal.
On 70 minutes White produced a magnificent save low down to his left to prevent the equaliser, which seemed to break the visitors spirits, as minutes later Irlam would add a second goal.
A ball out to Malumo on the left seemed to only carry a slight risk, but a rush of blood from the Charnock defence, as they suddenly found their keeper with them on the edge of the area, left Malumo with the job of steering away from the group who had assembled around him before curling a delightful shot over the heads of a stranded Charnock defence and into the goal to make it 2-0.
It easily could have been 3-0 as Nicholas whipped a shot just wide of the target, but the third goal would in fact materialise at the other end. A challenge on Charnock player Pilgrim was always going to be given as a penalty as Grimshaw reliably stepped up to convert to make it 2-1. A late rally by the visitors would come to nothing as the final whistle saw the 3 points remain at the RG3 Stadium.
A word of praise for the players and officials who gave the viewing spectators an afternoon of thrills and spill in absolutely terrible conditions
Share via
FacebookTwitter
https://www.pitchero.com/clubs
Recent news