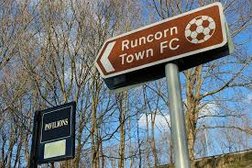 TIRED LEGS PROVE TOO MUCH FOR IRLAM

After a heroic 75 mins of playing against Charnock Richard at the weekend with ten men, and winning, Irlam's efforts would catch up with them on Tuesday evening at Runcorn Town's Pavilion ground.
An always organised Town side, you could set your watch to their trademark wide play and whipped in balls, were always the biggest threat on the night, and on 18 minutes the pressure told. A ball into the box was put back to White in the Irlam goal, but the ball back proved impossible to control, falling back to be cleared away by Irlam's defence, but in that split second Exell would force his way into the pack to fire home the opener for the home side.
In the second period Irlam would shape chances to penetrate the Town defence, Bardsley-Rowe working hard down the right and Campbell driving forward whenever the chance came. Despite the efforts, Town were suitably organised, and when a whipped in ball from the left went across Irlam's area for a tap in at the far post, you knew that Irlam's task had now become irretrievable.
John Main, a late substitute has a couple of solid chances late in the game, but on both occasions the ball would drop to his left foot, the young striker also off balance at the vital moment. On another day these would have been put away.
Two late chances fell to Irlam as the game drew to its conclusion, Derbyshire looked to be through on goal only for a last second challenge that thwarted the Irlam forward, whilst Bardsley-Rowe got his best chance , cutting in from the right, but with the angle narrowing the Town keeper would make a regulation save to keep the score at 2-0 on the final whistle.
Share via
FacebookTwitter
https://www.pitchero.com/clubs
Recent news