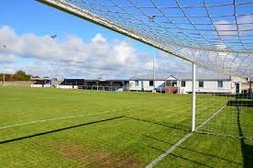 In terms of 90 minutes of football, Irlam played what many observers on the day would say was their most complete performance so far this season as they rattled 5 goals past Blackpool based side Squires Gate FC on Saturday. The hosts on the day, a young side but full of running were certainly competitive but Irlam, driven on by skipper Charlie Doyle showed that they are a force to be reckoned with in this season's title chase.
Squires Gate's first move up the pitch, inside the first minute of the game would prove to be their undoing, possession instantly won back by Irlam that led to a cross field pass by Doyle into the path of Irlam winger Marcus Perry, the Irlam no7 outstripping the Gate full back before rifling the ball into the roof of the net to stun the hosts as Irlam instantly took the lead.
The home side would spend a lengthy spell defending their area, a task that they stuck to well but on 22 minutes the pressure mounted again. An inswinging corner from Southworth created hesitation in the Gate area, keeper Gidley unsuccessfully coming out to claim the ball, allowing it to fall at the feet of Irlam forward Liam Pollitt, the Irlam striker calmly biding his time with his back to goal before swivelling and firing a low drive past the unsuspecting defence to make it 2-0.
Gates response was almost immediate, and on 26 minutes a well worked ball into the Irlam area was only half cleared, allowing Ricardo Rigidi to fire through a sea of players, a low drive that beat White in the Irlam goal to make it 2-1.
Just past the half hour mark the game would see its fourth goal, this time Irlam forward Jordan Southworth putting full back Meredith through on the overlap, the young Irlam defender moving across two two defenders before firing home Irlam's third of the game as the break beckoned. The last action of the half saw Jordan Icely dig out a looping cross from the right to find Southworth, the Irlam forward heading over the bar by inches as the HT whistle blew.
A quick start to the second period for Gate saw a whipped in cross/ shot from the left that saw Irlam keeper Lee White stretching to push the danger away, but as the game settled back down Irlam's possession would again grow.
On 57 minutes Irlam would make it 4-1 , a free flowing move that started with Southworth finding Icely, who in turn played Perry in for another run on goal and another unstoppable shot, again high into the roof of the net, giving Gidley no chance in the Gate goal.
Irlam forward Jordan Icely, back in the fold for this season, was certainly beginning to show his quality up top, no less than three consecutive chances in a short period were all foiled by the still hard working gate defence, but as the game started to move towards its conclusion, the assemble crowd were treated to probably the best goal they will see all season. Irlam skipper Charlie Doyle, some 35 yards out looked to be setting up another Irlam forward move, but instead the midfielder unleashed a shot that travelled all the way into the top corner of Gidley's net, an unstoppable strike to make it 5-1 on the day and move Irlam up to fourth spot in a what is a very tightly packed top of the table.
Share via
FacebookTwitter
https://www.pitchero.com/clubs
Recent news