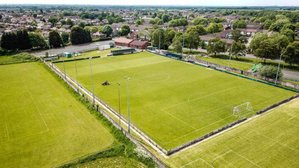 NEW MAN AT THE HELM AT IRLAM FC

At IRLAM FC'S recent AGM, the Club were delighted to announce the appointment of Dave Pike as the new chairman.
Dave is a well known figure around Irlam and Cadishead, and over recent years has been the driving force for a number of successful and ongoing projects at the RG3 Digital Stadium.
Dave takes over from outgoing chairman Steve Nixon, after Steve's highly successful period in charge,which during his time as chairman was the driving force in increasing Club partnerships as well as increased spectator attendances that continue to grow as a result of his efforts.
Our new chairman had a few words that he wished to share with all.

"I am incredibly honoured and privileged to be appointed as Chairman of Irlam FC and thank the Committee for their trust in me to help them drive the club forward.

Irlam FC is a fantastic club with its roots firmly embedded in the community. The last 12 months has been incredibly challenging. The pandemic has hit the club financially but we have weathered the storm due to the commitment of the committee who have worked hard in the background. But, more importantly to us, we have missed being able to play the game we love and enjoy watching our supporters come through the turnstiles at the RG3 Digital Stadium.

We can now see the light at the end of the tunnel. The juniors are back playing and our U18`s and 21`s have continued to work hard on the pitch, albeit behind closed doors. With a date set for the resumption of 1st Team football, we are working hard to improve the facilities at the ground and on the first day of the season they will be unrecognisable to many.

We are an incredibly aspirational club,and as Chairman my passion will be in helping the club achieve its dreams of playing football at the highest level with the best facilities possible. We have amazing supporters and we look forward to welcoming them all back. With substantial investment being made at the club, our vision is to provide the best experience for our fans and welcome even more of the community down to support their local club.

Finally it would be remiss of me not to mention the passing of iconic Irlam FC legend Ian Street. He was the backbone of the club and he will be sadly missed by everyone. He helped put in place the foundations of a club that has seen great success. If I can help achieve half of what Ian did whilst he was with us I will be incredibly proud.

Thank you again to the committee for appointing me as Chairman. I look forward to an exciting and prosperous 2021/2022 season at Irlam FC and meeting all our fantastic supporters.