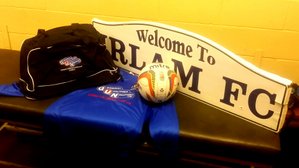 Irlam Football Club are delighted to announce the appointment of John Main as the Clubs new First Team Manager. John will be assisted by Ryan Hutchinson and Adam Cooper will move up from our U18’s to the position of 1st team coach.

This is a fantastic appointment for the club and brings together years of experience both on and off the pitch and on the training ground.

It goes without saying John has been instrumental around the club for many years playing a huge and leading role in the clubs highly successful youth system and the club’s infrastructure and facilities, which is undoubtedly one of the best at our level.

Supporting John is Ryan Hutchinson who is another long serving member of the club, from player to successful U21 manager where Ryan’s U21 squad won the Northwest U21 Development league 2 seasons running and a treble in one of those seasons, he then moved on to creating and establishing our fantastic junior section which goes from strength to strength.

Completing the team is Adam Cooper as 1st Team coach. Adam joined the club as a lead coach for our U18’s and has been with the club for 18 months. Adam also works as a coach for Bolton Wanderers where he leads the U9’s age group and is working towards his UEFA B. After a successful period of coaching the U18’s Adam will make the step up to 1st team duties.

First and foremost, I am delighted to be the manager of Irlam Football Club, a Club I obviously know extremely well throughout, where the tradition of finding the best young local players and providing them the opportunity to develop into 1st team players is second to none, this will continue. I am fortunate that I already know the young players coming through at the U18 and U21 level having coached many of them, so I am excited that we can continue the tradition of promoting youth.

The current squad at the club is a very young but strong squad and that is testament to the work that Michael and his team have helped develop and we will continue the drive to improve even further, there is more to come.

I am bringing two members of staff with me who I know very well and in Ryan and Adam I have exceptional qualities that will only help the players, the club and myself. Irlam FC is a community club, with the facilities and infrastructure to move up through the football pyramid and that is our intention.

We are keen to get started and I know that the supporters will get right behind us and we will do everything to make them proud of their football club.