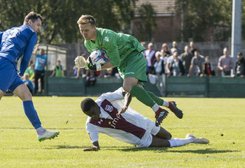 One To Eleven: Lee White

This week sees us ask our goalkeeper Lee White 11 questions about himself, his football and even his favourite TV programme!

Lee has been the first team goalkeeper for nearly 10 years; racking up his 250th appearance for the club this year.

How are you occupying yourself during lockdown?
I’ve got a 3 month old little boy, so I’ve been spending a lot of time with him, which has been the best thing about lockdown! Also to my own surprise I’ve been doing a lot of running, keeping the fitness ticking over!

Do you have a footballing hero? A player you really wanted to be like when you were younger?
Would have to be Edwin Van Der Sar; absolute legend at United and for me the best goalkeeper to play for United. With being a fan of attacking players I’d also have to say Cristiano Ronaldo. Unreal player.

Favourite all time television show and favourite episode?
The classic Only Fools & Horses without a doubt. Favourite one would have to be the episode Del & Rodney become rich, don’t stop laughing throughout that episode! Quality!

Guilty pleasures?
Don’t really have any, unless you count smashing Call of Duty on the PS4! I have been known to love a takeaway after a game; when I moved house last year I made sure my address on JustEat was up to date! ?

Can you remember your Irlam debut and anything about it?
Yes, I remember it fully. It was a night game, Ashton Town at home. We won 1-0 and I saved a penalty.

Favourite Irlam FC moment so far?
Had a good few to be fair, winning the league cup for the U21s on penalties was a gooden, as I scored the winning penalty!

We won the Reserve Division Cup back in 2013 at Glossop, with a lot of lads who are still involved now!

Chertsey Town at home in the FA Vase 5th round in 2018/19, a great day for the club just a shame about the result.

York City in the FA Cup on the BBC would be the biggest game I’ve ever played in; great occasion, playing York who were top of the Conference North and unbeaten. We could have got something but York just pulled away at the end to win 2-0.

We are drawn away in London in the FA Vase; which player wouldn’t you want to room with and why?
Charlie Doyle. No hesitation, wouldn’t get any sleep, the guy would be chatting to himself all night! ?

Who is the best player you have played with during your time at Irlam and why?
Ability wise Callum Nicholas is up there, quality player and the best player with the ball at his feet. Steven Mills at centre-half was an absolute brickwall every week! Quality defender and consistent every year! However I’d probably have to go with Jacques Kpohomouh, an absolute beast of a player and one of the main reasons we got promoted! He won league player of the year that season and it was fully deserved. (Lee won goalkeeper of the year that same year but didn’t mention it - we’ll do it for him.)

If you could play another position on the team, what would you fancy?
Obviously number 9, right up front, no messing about. I’d just play in the 18-yard box; as soon as I get a yard I’d be banging it towards goal!