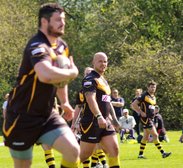 Despite a disrupted pre-season and the knock on effect of the Union season stretching out into the start of the League season due to bad weather, the Vikings travelled down to Catterick full of hope, if short on numbers!
It only took 4 minutes for Jarrow to post the first try for 2018, when Jack Weddell crossed the line to score and new signing Adam Houston did what he does best and added the conversion from out on the left. Catterick rallied but were constantly sent back with the ruthless push from the Jarrow defence.
Viking veteran Phil Wall was next on the score sheet, powering over from short range leaving Adam Houston with an easier conversion and extending the Viking lead to 12 - 0.
Some resolute defence from the home side held back the Viking hoards for 15 minutes before Richard Foster smashed through in the 22nd minute to score on his return to the Black and Amber, Houston assured with the boot once more.
A debut try for Ben Dalton followed in the 26th minute, then a further 2 unanswered tries from Derek Worthington on Toby Hancock took the score to 36 - 0 at the half time whistle.
The players were relieved to get the break at half time as the lack of replacement and searing heat was taking its toll.
It only too 2 minutes from the restart for Jarrow to continue their dominance in the game and Derek Worthington posted his second of the game after some good build up play to leave the Vikings in good field position, the next 10 minutes was all about Viking structure and organisation in attack and defence and they posted a further 3 tries, Todd Riley, Clark Dean and Ben Dalton bringing up his brace of tries. The machine like boot of Houston kept the score board ticking over. Despite the one sided scoreline the Crusaders never gave up and worked hard to gain some momentum, unfortunatly the Vikings would not allow this to happen and thwarted every attack and built pressure in the heat, and injury to returning foward Martin Bengsto reduced the Vikings to one fit replacement as the forwards were starting to suffer.
Ben Dalton completed his hat trick of tries in the 68th minute and skipper Gregg Newlands scored on the 74 minute to take the score to 72 points to nil.
Catterick were rewarded for thier efforts in the 78th minute when they were awarded a try, much to the disapointment of many of the Jarrow players, not because they didnt feel they desereved it, but because there was a clear infringment before the try was scored.
With the game in the bag and only seconds on the clock the call accross the pitch was for the Vikings to play safe, no risks and see the game out. However, despite all the players saying that, the final play of the game was breathtaking, and some fantastic handling and running saw the ball pass through 6 - 8 players hands, from one side of the pitch to the other, ending with Gregg Newlands crossing for the final try, surprisingly this was the only conversion Adam Houston missed all game, ending his kicking tally at an impressive 12 out of 13 attempts! Outstanding effort from the new man, however it was the machine that is Toby Hancock that picked up the Nandos Man of the Match award for his non stop effort in attack and defence. Next up for the Vikings are Peterlee Pumas at Kingston Park as part of the North East Magic weekend, 3.15 kick off.
Share via
FacebookTwitter
https://www.pitchero.com/clubs
Recent news