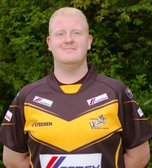 2019 Season off to winning start

Jarrow took on a new look Durham Tigers side at Monkton Stadium.
This was the first game in charge for new head coach Adam Houston and the players were keen to get off to a winning start for the new man.
The Vikings were also fielding a new look side with a number of new faces in the starting line up and a number of players trying out Rugby League for the first time.
It only took the home side 2 minutes to register the first try of their 2019 season when veteran hooker Phill Wall, in his 15th season with the club, struck from short range and stand off Gary Bates added the extras with the conversion.
The large Tigers pack battled hard to gain a foothold in the game but were repelled by an equally determined Jarrow defence who were ruthless in their efforts to stifle the attack.
Jarrow struck again in the 17th minute when new boy Ben Marshall showed his power and class to finish well on his home debut.
8 minutes later Wall struck again with his trade mark strike from short range again, Bates again true with the boot.
Paul Evans crossed the line on the half hour mark, ghosting through the defence to leave Bates his easiest conversion of the game, stretching the lead to 22 points to nil.
In the last play of the game Durham were rewarded for their efforts when powerful second row Andrew McAdam crashed through to score and Euan Kitching added the conversion to take the teams into half time Vikings 22 – 6 Tigers.
The talk at half time from Houston was for patience and shape in both attack and defence, which would allow the home side to dictate and control play in the second half.
The second half got underway with Tigers still on a high following their late score in the half, but Vikings withheld their onslaught and pushed hard to regain dominance in the pack.
They were rewarded in the 46th minute when another debutant Matty Dockey posted his first try for the club and Bates stretched the lead further with the conversion.
A frustrating period saw both sides get frustrated by too many unforced errors and break down of passages of play.
Order was restored on the hour mark when club captain Gregg Newlands crossed the line and Bates slotted the kick from out wide on the left.
With 8 minutes left on the clock prop Jack Weddell took the ball just outside his own 20 metre line, crashed through a couple of would be defenders, sidestepped another and outsprinted the cover defence to score under the posts leaving Bates a simple task to convert, taking his tally to an impressive 6 out or 7 conversions.
Unfortunately CEMEX Man of the Match Weddell had to leave the field just before the final whistle due to an elbow injury.
Despite the 40 – 6 final score the Vikings are still some way from firing on all cylinders and have a lot to focus on in training ready for their next game away to new boys Hartlepool.
Share via
FacebookTwitter
https://www.pitchero.com/clubs
Recent news