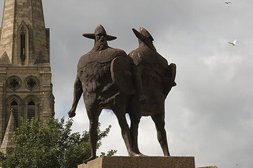 North East Rugby League club Jarrow Vikings are looking to freshen things up going into the 2020 announcing a brand new logo for the club.
The Club, formed off the back of extensive development in primary schools in Jarrow and Hebburn in 2003-04, was originally established out of Luke's Lane. In keeping with the Town’s history, relating back to the Viking raids of 700-800AD, Jarrow Junior Vikings were formed at the under-12 age group.
Soon after there was enough interest to form an adult section with a number of players coming forward from various Rugby Union clubs and Student Rugby League set-ups in the North East, the side were soon training and joined the North East Division of the Rugby League Conference for 2004.
The club's reputation soon grew and their interaction in the wider community earned them the National title as Best New Club for 2004, for which they received an award from the Rugby Football League.
In 2005, Jarrow Vikings stepped up to the newly created North Premier Division and in 2007 theyre-joined the North East League. Jarrow won their first silverware in 2009 when they took the North East title and then enjoyed a period of dominance, winning the North East League five times and the North East Cup twice between 2010 and 2016.
The Vikings completed the 2019 Season as North East League Winners but lost out in dramatic fashion in the Grand Final to Edinburgh Eagles in Golden Point Extra Time in front of a bumper crowd on North East Finals Day.
2020 saw the Vikings represent the North East in their first ever appearance in the prestigious Ladbrokes Challenge Cup but unfortunately bowed out in the first round losing away to Pennine League side Upton 30-4.
Preparations are underway for the Vikings Open Age side to begin their attempt to go one better than last year and win the North East Grand Final and they have ambitious plans to field two teams with Development team fixtures planned throughout the season. 2020 will also see the re-emergence of Juniors in the Black & Amber of Jarrow Vikings through a link up with Dunn Street Primary School which will hopefully see the formation of an Under 10s team this summer.
Club Chairman George Taylor will take a lead on the re-launch of the Juniors and is keen to see the club grow from strength to strength in number. Jarrow are fortunate to be able to boast a number of former Viking Juniors who now play within the professional ranks, Kieran Hudson and Rory Nettleton who currently play for Newcastle Thunder and James McGurk at Bradford Bulls but it has been a few years since the last group of Junior players graduated into the Open Age set up.
The future is bright for Rugby League in South Tyneside and the future is Black & Amber.

Anyone looking for more information can find us on Facebook & Instagram @JarrowVikings or find us on Pitcherohttps://www.pitchero.com/clubs/jarrowvikingsrlfc/