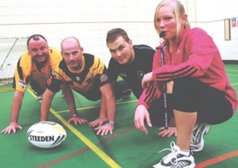 THE feminine touch has proved a far from trying experience for a highly-successful rugby squad.

For the second year running, masculine types from the high-scoring Jarrow Vikings are being licked into shape by female fitness instructor Vicki Loader.

The squad is again benefiting from boxerfit classes at Monkton Stadium, Jarrow, led by Mrs Loader.

Head coach George Taylor said: “I boxed for five years in the forces and know the similarities between this form of training and the fitness requirements for rugby league.

“Last season, we went to a lot of boxerfit sessions with Vicki as part of the lads’ pre-season training, in order to increase the players’ conditioning and stamina – and it certainly paid off, as we won the league.

“We were by far the fittest side in the league, which told in the last quarter of every game we played, and Vicki’s training sessions certainly played their part.”

Jarrow Vikings are the most successful amateur side in the region, and have been North East champions for the past two years, having never been out of the top three in the league since they formed in 2004.

And Vicki, 30, from South Shields, is delighted to be able to take some credit for the team’s success.

She said: “The rugby lads are a great laugh, and do really well in the sessions. But the class is designed to benefit everyone.

“If you’re a fitness fanatic, we’ll push you to the max – but it’s also a really fun way for people just starting out getting fit. The class is for both men and women, and is a mixture of exercises, all set to high-tempo music to help keep everyone’s energy up.

“I’d love it if the lads won the league for the third year running – and it would be great to think my class played some part in their success.”

Mr Taylor added: “All of our players loved the sessions and the variety of the circuit training. As the weeks progressed, the level of the team’s fitness improved, and every one of them pushed themselves even harder.

“During the season, it really paid off and played a massive part in six of the players improving that much they were offered professional playing contracts with York City Knights and Gateshead Thunder.”

Jarrow Vikings’ season starts on April 30, when they take on Wallsend Eagles. To apply to try out for the team, e-mail: george.taylor@rfl.uk.com