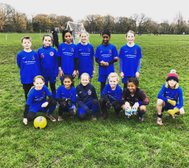 Julian's grab a deserved point against the league leaders

Captain marvel Rhoshaine put in a super-hero performance to smash home a crucial equaliser in their top-of-the-table clash with Dulwich.

But Julian's, in second place, were out to avenge their 6-2 humbling at the hands of Dulwich earlier in the season, and set about the opposition with gusto.

Betsy on the left and Rhoshaine on the right personified Julian's determination and spirit with some gut-busting runs.

Centre-forward Zosia was also taking no prisoners powering her way through several times only to be thwarted by a last-ditch Dulwich tackle or wayward shot.

Playmaker Finn was controlling the tempo of the game, breaking up potential Dulwich counter-attacks and keeping the opposition camped in their own half.

Such was the dominance of Julian's that the new centre-half pairing of Martha and Isobel had little to do in the first twenty minutes but keep their concentration. When they were called into action they dealt with the threat admirably. Communicating well, they looked like they had been playing together for years.

Yet despite the fine start, and against the run of play, Dulwich showed why they are favourites for the title. It only took one chance and their striker smashed the ball past Azariah, despite her best efforts.

Julian's were momentarily stunned but soon bounced back, roared on by the raucous parents on the sidelines.
Olvia steamed through and stung the hands of the Dulwich keeper but the goal would not come.

On came Iris, fresh from her six-goal heroics, and was a constant threat but Dulwich refused to buckle. Bree was also added to the mix and did not give an inch. It was that fighting spirit that saw Julian's finally get their just reward,

Dulwich took an eternity with a throw-in deep in Julian's territory as their coach made some late substitutions.

The league leaders had completely lost focus and Julian's quickly won back possession. Rhoshaine did not need a second invitation. She sprinted through and let loose with a rising shot that gave Dulwich keeper no chance and Julian's a deserved point.