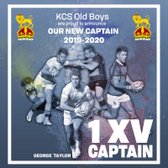 King's are delighted to announce the appointment of George Taylor as the new KCS Old Boys' 1XV captain.

1XV centre George's association with King's goes back almost two decades having joined aged 5 at the turn of the millennium. George came through a full cycle of Mini and Junior rugby and was one of an outstanding group who enjoyed huge success at each age-group.

As well as his Mini / Junior rugby, George also represented KCS Wimbledon and later Whitgift with distinction, was selected to join the Harlequins Academy programme and received international recognition by England at U16. Subsequently he went on to enjoy several successful years at Exeter University, playing for King's U21s during the Christmas and Easter holidays and even managing sporadic appearances for the Senior sides.

Having graduated in 2018, George returned to the club full-time last Summer and went on to make 18 appearances for the 1XV scoring 15 tries, winning 2 MOM awards and ultimately being voted the 1XV Player of the Season.

With the 1XV's promotion to London 1 South, he will lead the club at an exciting time as King's compete at Level 6 for the first time in its 112 year history.

As one era begins, so another must end as Tom Dugarin - another abundantly gifted inside centre - steps down from his role leaving the Club in a position of strength which is testament to his ambition, drive and the high standards he has set for himself and others.

After an 8th place finish in 2016-17, King's kicked on to finish 4th in 2017-18 and this season, as has been well documented, King's 1XV achieved try bonus points in every game they played to win London 2 South West, shattering numerous long-standing L2SW records along the way, and achieve an unprecedented 'perfect' 22 wins (110pts).

Tom has invested a huge amount of time and energy throughout the period of his captaincy and everyone connected with the Club would like to go on record with their thanks for his incredible efforts over the last 3 seasons.

The King is dead, long live the King!