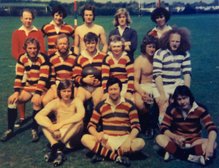 A brief eulogy from Tony Hein

I have known Tony for just 60 years. A few of you have known him longer. Others of you have become friends as a result of being neighbours, colleagues or from your involvement in the many social activities which he enjoyed throughout his life. All of you, I am sure, will have memories of him as a gentle, kind and unfailingly polite man. I am confident in saying that none of you has heard him raise his voice in discussion or make an unkind remark.

Tony was a pupil at King’s College School, a few hundred yards from here, and left it in 1948 having made many lifelong friends. In truth, though, he never really ‘left’ the school as he has been involved in various aspects of its life ever since. He was a committed and hard-working member of the Old King’s Club organisation, a stalwart attender of its committee meetings and the organiser of many annual dinners. Fittingly he was honoured by being elected its Chairman from 1991 to 1995.

Tony was also a member, for over 70 years, of KCS Old Boys rugby club, initially as a twinkle-toed fly half and later in a number of roles. When Tony hung up his boots, as a devoted husband he decided to spend his Saturday afternoons helping Jean around the house and entertaining their children. Rumour has it that it wasn’t long before Jean tired of having him under her feet and she encouraged him to ‘go and do something useful at the rugby club’. So she bought him a whistle, showed him how to blow it, talked him through the laws of the game and sent him off to become a referee.

This was an inspired piece of advice from her as Tony became a regular and respected referee at the club, becoming a much loved arbiter of the laws of the game. He particularly enjoyed his association with the Veterans' XV who appreciated his readiness to accept advice, particularly from scrum halves, his light touch and his repartee. May I offer you an example? Following a line out, a mass of bodies collapsed over the opposition try line, the ball completely hidden under a heaving mountain of beer bellies and varicose limbs. Tony took his time, leaping around like a ballet dancer on amphetamines, desperately trying to locate the ball. Time passed but, encouraged by our solitary female supporter who yelled ‘For God’s sake Tony, do something’, he eventually blew his whistle, raised his arm and stated ‘’That’s a try gentlemen and there’s no point in arguing. My indecision is final’’!

When refereeing days ended for Tony, he decided to offer his help in the rugby club kitchen and, in order to prepare himself for the task he signed up for evening class cooking lessons. Although he was the first person in adult education history to fail the test to move from ‘Preliminary’ to ‘Fundamental’ level, he persevered and his ‘baked beans carbonises’ developed something of a cult following at the club.

Tony was totally without ego. In any social situation he was caring and sensitive and good at putting people at ease. Wherever he found himself he chatted with anyone and everyone and will be missed as much by Tesco check-out ladies and coffee bar waitresses as by knights of the realm.

He cared for his friends and was always solicitous of their well-being and that of their families. He had a great sense of humour and enjoyed joshing and joking, even if sometimes it was at his own expense. He would not want this to be a sombre occasion, but a celebration of his life much enjoyed and well-lived.

Although modest and self-deprecating to a fault he enjoyed being the centre of attention. For his 90th birthday in October 2020, a socially distanced street party in Beverley Avenue in the middle of the pandemic and celebrated by his neighbours, brought him huge pleasure. Looking down on us now, Tony would be secretly delighted at how many of you have wished to attend this service today.

Tony and Jean have always been quietly but rightly proud of their children, Tracy and Tim and their families. They, and we, have been fortunate and blessed to have enjoyed and benefited from the company of the kindest and gentlest of gentlemen.