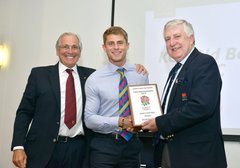 Last week 19 King's players and representatives headed to the Stoop to attend the annual Surrey Rugby awards night, this year hosted by our former 1XV captain (1980-81) and Club President (2012-17) Darryl Druckman who is the incumbent Surrey Rugby President following in the footsteps of John Hamilton (KCS President 1985-96; Surrey President 1999-2001).

On the night King's were one of the more decorated clubs attending as George Taylor collected the prize on behalf of the 1XV for winning London 2SW whilst Mike Hill and Lorcan O'Duffy collected the 2XV's award for winning the Conference North.

In addition to these awards, which the players knew they would be collecting, the Surrey Chairman Nigel Heslop also presented Sam Richards and Jonny Kiddle with the discretionary Chairman's Award in recognition of King's 'Perfect Season' of 22 bonus point wins.

The keynote speaker was the recently retired BBC commentator Ian Robertson who regaled the room with numerous anecdotes from his colourful career including, famously, commentating on Jonny Wilkinson's 2003 RWC winning drop-goal, made easier as Scotsman he told the room as he had laid a small wager on the outcome so the excitement in his voice was not just down to the occasion but also the certain knowledge his bet had come in!

All of these presentations and selection of additional images from the night can be seen in the Surrey Rugby Awards 2019 album on the website.