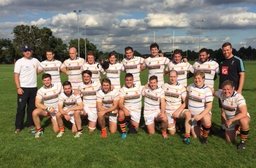 King's produce a composed performance to overcome a strong London Cornish on the opening league weekend.

It was good to see Harlequins and England hooker Joe Gray on the touchline – and the effects of his coaching of the forwards was evident against a Cornish pack which had dominated up front in last season’s two encounters; and Joe appreciated the thrills and spectacle of a competitive RFU level 7 contest.

King’s dominated the early stages of the contest, pleasing (and surprising) the spectators by nudging back the Cornish pack, and securing superior possession and field position. After sixteen minutes, loose head prop Joe Mason powered over for a try at the culmination of a multi-phase attack, which stretched and eventually broke down the defence. Shortly after, a similar series of high speed attacks saw Diggy Forshaw put away in space on the left wing. Eschewing classical wing style, Diggy cut infield, and then outpaced the cover to score a brilliant try out on the right. Fly half Rory Jones added both sets of extras, plus a penalty goal; these scores were answered by two Cornish penalty goals.

At this stage, leading 17-6, King’s should really have put the match away, with the Cornish midfield stuttering, and their pack apparently unable to come up with an effective plan B. However the pattern of the game suddenly changed, amid a flurry of technical yellow cards, one against Cornish and two against King’s; and when unopposed scrums were temporarily ordered, King’s were playing with just 12 for a spell. The home team did well to concede one try (unconverted) before half time, bringing the score to 17-11.

King’s were still depleted at the start of the second half, and Cornish added a further try by their speedy fullback Jackson Szabo, to close in at 17-16.

Once normal numbers and competitive scrums had been restored, the game entered a rather flat period, in which King’s could do no more than add a Jones penalty goal for 20-16. A final yellow card, for an inadvertent but clear high tackle by Rory Jones, left King’s again playing short-handed, with about 20 minutes to go – and this set up the exciting finale. Cornish engineered a try out on the right; this was again unconverted, but Cornish now had edged in front, 20-21. King’s responded strongly, and renewed pressure led to the award of a kickable penalty. As Jones was languishing in the bin, Will Slater stepped up – and hooked his effort across the face of the goal. Slater redeemed himself a little later by touching down between the posts, after King’s had shown renewed discipline and focus as the clock ticked down. The returned Jones chipped over the extras, and King’s were able to close out the game for a 27-21 win without further alarms and excursions to test the home spectators’ frayed nerves. King’s never quite recovered their first quarter fluency, but their strong all-round performance justified the win.

Hooker Harry Booth and centre Harrison Scowsill both suffered game-ending knee injuries. We wish them both speedy recoveries. Their replacements James Williams and Barry Williams both stepped up admirably to the challenge. The starting team had been bolstered by the presence of George Taylor and Diggy Forshaw, both apparently grateful to escape from the horrors of Exeter University Freshers’ Week. George was always a handful in the centre and was involved in the set-up of all three King’s tries; and Diggy must have been a nightmare to play against, with his back row skills contributing to a refreshingly unorthodox and effective approach to wing play. The half backs Will Slater and Rory Jones played with increasing poise, combining enthusiasm with just about the right level of prudence to secure an impressive result. All units of the pack performed effectively, with returning Ciaran O’Duffy standing out for his energy and ball playing skills at number 7.

We wish Cornish well for the rest of their campaign – until we meet again on 23rd April!

Next Saturday the 1st XV will travel to Basingstoke RFC. The KO is presently listed at 14:00. Basingstoke lost their league opener away at Weybridge Vandals by 7-30.