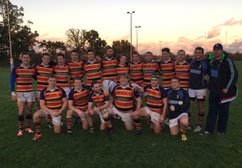 Another close contest sees King's prevail and move up a league place to third.

The 1st XV returned to winning form with a well contested win over the 'Eagles', at a wet and breezy Motspur Park. These teams have enjoyed a highly competitive rivalry over recent years, and the Old Boys needed to raise their game to neutralise E&L’s strong first quarter showing, especially in the set pieces. Fly half Rory Jones and fullback Will Nelson put in effective performances, and No.8 Louis Mather had an outstanding game achieving forward momentum on many occasions.

King’s had a struggle on their hands in the early stages, despite playing down wind, and E&L scored two unconverted tries with their excellent outside centre looping swiftly around the left wing to take the scoring pass for the second. King’s answered with a Jones penalty goal and gradually the home team began to secure some possession allowing the back line to be released into space and with this the King’s outside backs were able to go through some phases and exert pressure out wide. This improvement eventually registered on the scoreboard with a Will Nelson try (unconverted), and a second penalty goal by Jones saw King’s edge into a precarious 11-10 lead. Shortly before half time, the best handling move of the match put Nelson in possession towards the E&L 22. With the defensive cover massing, Nelson put in a weighted chip infield, gathered the bouncing ball and raced through the suddenly split defence to touch down, Jones converting. 18-10 King’s at half time.

The blustery wind had dropped by the end of the first half, denying advantage to the visitors. The second half largely played out as a stalemate. From the King’s perspective, the improvements in defence and in ball winning were sustained, but the only score was a further penalty goal struck by Rory Jones. King’s were now attacking visibility tiring opponents, but handling errors caused by the wet ball stopped several try scoring opportunities, and the match concluded as a comfortable enough 21-10 King’s victory.

Elsewhere in the league, Portsmouth pulled off the surprise of the week with a 5-19 defeat of 2nd place London Cornish, and our next opponents, Warlingham, beat Weybridge Vandals 7-20, away. London 2 SW is proving to be an unpredictable contest, with just 8 points separating leaders Cobham from the 9th team Portsmouth. The match at Warlingham next Saturday kicks off at 2:30pm, and King's can expect a demanding struggle in front of a large and vociferous crowd.