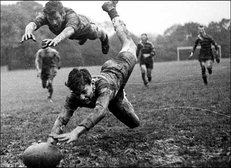 Wet Warlingham Are Home and Dry

In a game of just ten points, Warlingham emerge with the thin edge of the wedge.

The teams slugged it out up front in a dour contest dominated by driving wind and continuous rain – genuinely diabolical! Despite enjoying rather the better of both territory and possession, King’s were unable to translate pressure into points, beyond a Tom Dugarin penalty goal. Warlingham scored the only try of the match just before half time, swiftly and accurately moving the ball out and over on their right, after a driving maul, and adding the extras via the place kick of the match.

Both sides missed penalty attempts that would have been straightforward in more normal conditions. There was very little between the teams, and King’s can take some heart from a sterling performance by the pack. The half-backs tried everything to conjure a score, and Warlingham’s defensive efforts, especially in open field tackling, were outstanding; so King’s had to settle for a losing bonus point as returns for their strenuous efforts. It was good to see Guy Tyler back in action, and his one penetrating run promises more of the same to come.

The teams meet again in late February, and we can look forward to another spirited encounter. King’s entertain Winchester next Saturday, KO 2:30 – 4th playing 6th in this highly competitive league.