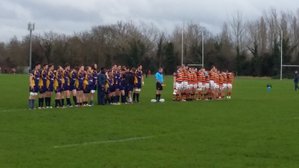 It’s Rugby, Jim, Just As We Know It

A challenging week in more ways than one for King’s Rugby culminates with a display which whilst by no means faultless was ultimately effective.

With 2016 just a little over a week old King’s turned the hairpin corner in the ’15-’16 season and began the ‘return leg’ of their L2SW fixtures welcoming Basingstoke to Motspur Park. It’s fair to say that last year was one to forget for the visitors in which one win was set against twenty-two successive losses, as a consequence of which, following relegation from London One South, ‘Stoke continue to await their first points of the current league campaign. The reasons behind their slump have been well documented and do not need repeating here, suffice to say the coaches and committee who are now at the helm are pragmatic about matters and the future of the club is secure lying as it does in capable hands.

Whilst 2015 may have been an annus horribilis for ‘Stoke, 2016 has started in a most inauspicious way for King’s as following a courageous battle with cancer we learned that club stalwart Andre du Toit had passed away. Over a decade or more ‘Hoff’ contributed to almost every facet of life at King’s Rugby and was held in the highest esteem by all he encountered along the way. No gesture, nor words, can adequately capture the feelings of all affected by the passing of a friend, but the minutes silence immaculately observed by the teams before kick-off was no less than Andre deserved.

With the fixture in some considerable doubt as late as Friday afternoon, due to the periodically biblical rain in SW London in the preceding days, it was with some relief that the pitch had shaped up as well as it did and so it was that at 1503 referee Gavin Scott blew his whistle. The match was barely 3 minutes old when Mr Scott had occasion to blow again penalising King’s for coming off their feet in an eminently kickable position. Basingstoke elected for ‘sticks’ and the flags were soon raised; 0-3.

King’s have form for lethargic starts and following the early exchanges it was ‘Stoke who looked the hungrier and observers were left wondering if the Old Boys were suffering from a collective post-Christmas malaise. Having squandered their first territorial advantage, conceding a penalty from an attacking lineout, scrum-half Will Slater took it upon himself to energise proceedings darting upfield. Just two phases later Gareth Stoppani hit a trademark aggressive line and jinked his way past several sprawling defenders to cross for a try he converted; 7-3. Like London buses Stoppani tries frequently arrive in pairs and so it proved as Guy Tyler capitalised on a loose kick from the ‘Stoke fly-half before releasing the full-back for a second score close to the corner flag; 12-3

Stoppani’s brace looked to be the shot in the arm the home team needed and the forwards, not wishing to be outdone, soon began to dominate the ‘Stoke scrum, the visiting loosehead being retired from action after less than twenty minutes. For all their promise King’s execution was conspicuous by its absence and when frustration gave way to mistakes ‘Stoke were able to kick a second penalty; 12-6. Any lingering suspicions that today was going to be anything other than hard work were compounded just moments later when Tom Smith went on a trademark mazy run and despite being tackled as he crossed the line the winger was able to stretch an arm out and dot down. Not so said the referee who upon arrival deemed the ball held-up. King’s continued to press and it was not long before the ‘Stoke No.8 found himself on the receiving end of a ‘team’ yellow card for persistent ruck infringements. Perhaps fuelled by the injustice of his previous visit to the in-goal area, when Smith was given space in first half injury time he raced home from fully 50m and this time ensured their could be no doubt as to the legitimacy of his try; 17-6.

Although ahead things were certainly not comfortable for the hosts and playing into the wind in the second period concentration was a must. Regrettably with the half just three minutes old Freddie Edwards took a heavy blow to the head and was withdrawn, Brett Williams the more than capable replacement. ‘Stoke, now restored to their full compliment, pressed and a close quarters foray elicited a high tackle and a penalty. ‘Stoke kicked and the gap was closed; 17-9. Playing his last game before a move to pastures new, for a while at least, Stoppani appeared determined that those watching would be left with something to remember him by and soon after he combined with Tom Smith who released the departee for his hat-trick (and try bonus point) score; 22-9.

‘Stoke may been down but they were not out and they attacked energetically although their full-back may have wished his sat-nav had taken him down a channel other than Sam Harrison’s, the lock halting one excursion with enough force to ensure the lad’s osteopath will be kept busy for week or more. The visitors continued to press and a similar mid-field excursion culminated in crunching double tackle, although this one drew a penalty and spell in the sin-bin for Stoppani for a high tackle. Depleted King’s manfully resisted for 9 minutes but eventually the men in blue contrived to splash over from a driven lineout and make the scoreboard interesting once again with 12 minutes still to play; 22-14.

Suddenly it was as if Prince Charming had awoken Sleeping Beauty with a kiss as King’s spontaneously galvanised themselves and produced a spell of irresistible running rugby so beloved by the home supporters. First to score was Rory Jones who won a foot race down the right wing before gathering and touching down in one fluid movement; 27-14. King’s were in full attack mode and with captain Jonny Kiddle having been held up over the line, Will Slater took matters into the hands of the backs once again and sniped for five points of his own, improved by Jones; 34-14. There was still time for one more score as fly-half Jones took advantage of a weary defence, a deft cross-kick landing in the safe hands of winger Jonny Bell who cantered home in the last meaningful action of game; 39-14.

Both sides will take something away from the encounter. For King’s it’s 5 points and a timely reminder that no team in this league can or should be underestimated. For ‘Stoke, they showed enough for 68 minutes to reassure their supporters that better times surely lie ahead.

January is a month without respite and next King’s will visit long standing adversaries Old Reigatian who are sure to be determined to serve a slice of their own cold revenge following a defeat to the Old Boys in October. If King’s can replicate the form they showed in fits and starts today they will be hard to beat – same old King’s Rugby, just as we know it.