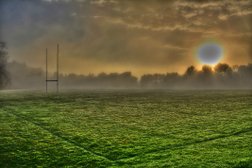 In the second low scoring game between the sides in 2015-16, King’s this time did enough to ensure that it was they who prevailed.

After a month spent on the road or at rest King’s were pleased to be home and welcomed visitors ‘The Mighty Warl’ to a wet and blustery Motspur Park. When King’s travelled to Hamsey Green in November the weather was similarly inclement and the teams played out game which the home side shaded 7-3 to record their fifth victory from their opening seven fixtures in a fine start to the season. Since then positive results have been harder to come by for the men in blue and white and they had to wait until 23rd January and the visit of the league’s bottom club, Basingstoke, to chalk another win before overcoming Andover 13-12 a fortnight later to put some breathing space between themselves and the second relegation spot. Although Warlingham would not have enjoyed their visit to King’s last season, losing 52-16, they would have been rightly confident of a more competitive outing this time.

After suffering a frustrating loss with the last kick of the game a week earlier, King’s were eager to shake off a dip in form which had seen them suffer back-to-back defeats by Exiles and Eagles. The team showed several changes from the side that came up short seven days ago with Sam Harrison back in the second row, Max Mather on the blindside with Chris Breslin moving to the wing, Toby Pheasant at 9 and Exeter students Ed Forshaw and George Taylor into the back row and centres respectively. With, slightly, longer days now back with us it was 1430 when King’s lined up to receive Warlingham’s kick.

The early exchanges were bruising as the teams clattered into each other, both struggling to keep effective control of the slippery ball, something which was to be a feature of the match. With little more than 3mins played King’s were forced into a change as Sam Harrison’s return was prematurely ended as a result of a stray boot which left him with two unpleasant facial cuts; Brook Wannop replaced him with Max moving forward to lock. Despite admirable attempts to do so neither team was able to string more than a handful of phases together each one ending with some sort of mistake or the ball kicked away. Warlingham were unfortunate that their first truly incisive piece of back play culminated with a forward pass and a reprieve for the hosts.

King’s did their best to force the action into the Warlingham half and a series of penalties afforded them a promising attacking platform. The home team’s lineout was all but impeccable on the day with Max and Henry Binnian securing a steady steam of clean ball and successfully disrupting the visitors’ set-piece. Indeed it was from a driven lineout that King’s came closest to the opposition line, but the threat petered out when a curious penalty was awarded for holding on despite the tackler having been loudly warned for not rolling away. Anyway, moments later and Warlingham achieved good field position of their own and having unceremoniously shunted King’s back at a scrum, and gained penalty advantage in doing so, their lively fly-half spotted a gap and darted over but was unable to add the extras; 0-5.

With ten minutes before the break King’s looked to assert some authority and Tom Dugarin led the charge with strong break which ultimately led to the award of a penalty in front of the posts as Warlingham transgressed, although alas the kick was missed. Keen not to turn around trailing King’s kept the pressure on and the effervescent Ed Forshaw made good ground from the 22 restart, Joe Mason went even closer and did well to offload to Barry Williams who crossed the whitewash. This time Rory Jones made no mistake; 7-5. Both teams could have scored in the time remaining, Warlingham for their part were undone by a misdirected pass behind the intended recipient in the home 22 and when Chris Breslin scooped the bobbling ball it looked like he might have the chance to go the length but in his attempt to do so became isolated and Warlingham were able to clear the danger to bring the opening forty to a close.

With rain being blown in horizontally the game was never destined for greatness but in such conditions the margins are fine and both teams set about the second period in enthusiastic pursuit of the next score. The inspiration for the visitors came from an unlikely source as their hefty loosehead prop found himself in space and embarked on a marauding run. Although he didn’t have the means to make it all the way he did put King’s on the back foot and soon after Joe Mason was the arbitrary recipient of a yellow card for repeated team infringements. Shorn of a prop Brett Williams joined the fray.

Try as they might neither side appeared capable of breaking the deadlock and it wasn’t until mid way through the half that an opportunity arose as Warlingham came offside. King’s kicked for the corner and won the lineout uncontested before falling for the ‘Italian lineout defence’ made famous in the 2007 Six Nations, their canny No.8 sneaking round to tackle the ball carrier whilst his teammates distanced themselves from any contact. King’s were not to be denied for long however as shortly after Warlingham conceded a second penalty for the same offence and this time Jones preferred to kick; 10-5.

With King’s now well on top at scrum time, not least due to the close-quarters strength of Brett Williams, home supporters hoped this may pave the way for better things but in fact with the clock off as much as it was on (over 12mins injury time being added) errors were the overriding feature of both teams’ play. When King’s did eventually break the line as Rory Jones hit Guy Tyler speeding through the vacant inside centre channel the referee called them back having deemed the pass forward. With the clock now ‘red’ Warlingham swarmed forward in search of points and their out-half came within inches of a second try. They persisted in battering the line, but King’s would not yield, even when once again reduced to 14, and ultimately it was a magnificent hit from replacement Will Nelson which marked not only the end of the attack but with it the match.

Over the course of the two games between these sides King’s edged the aggregate score 13-12 which shows nothing if not how competitive the league is this season. Warlingham picked out Barry Williams as the home side’s man of the match, his third such award in 2016, for another successfully disruptive outing. For King’s part the visitor’s influential inside centre was similarly nominated, on another day he could easily have had at least one try. It seems unlikely either team will be going up or down this season so assuming Warlingham aren’t lost to L2SE in 2016-17 we shall look forward to seeing them again later in the year.

Having seen the back of a busy January games are now somewhat more spaced out and King’s must wait a fortnight before going to Winchester. The Old Boys recorded an narrow 18-15 win against the Hampshire side before Christmas and with ‘Winch’ firmly in the race for second place a performance no less excellent will be required if King’s are to leave North Walls with a positive result and should they do so they could leapfrog their hosts in the table. There is, as they say, all to play for.