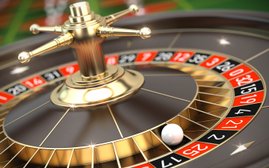 After the excitement of London Cornish three weeks ago, King’s had come down to earth with an ignominious soggy bump away at London Exiles and found themselves looking for their first win since 10th December with Twickenham RFC today’s visitors. Having been jettisoned from London 1 South last season, Twickenham initially had mixed success back at Level 7 winning three but losing five of their opening eight games. Since then it’s plain to see they have more than adjusted to life in London 2SW winning five of their last six, and they have shown an insatiable appetite for bonus points, collecting 12 from their 14 games. Coming into the clash the visitors sat in 4th place, their hosts in 8th, and with Twickenham disappointed to have succumbed 18-30 to King’s at home they were out to right some wrongs.

The King’s line-up reflected a refreshing stability for the fifth game in succession, showing just a handful of changes from the XV who took to the Barnes bog a fortnight ago. In the backs James Sharpe returned at scrum-half to replace Rory Jones and George Taylor was pressed into action at full-back for Max Morgan; up front Brett Williams gave way to Jonny Kiddle who moved across to tighthead making space for Thomas Cobb to push up to his favoured hooker role from No.8, with Harry Wakefield taking his place. The final change saw Duncan Bucknell reinstated in the back-row for his first start of 2017. Most remarkable of all were the locks, the same pair packing down for the third week in a row, a first for this campaign. For reasons unclear the game kicked off two minutes early, fortunately all the players, if not all the supporters, were at least ready.

It was the visitors who started brighter of the two, a dashing break down the flank stopped just in time to save King’s any early discomfort and embarrassment. In fact Twickenham were well on top in the opening moments and already looked a more assured side than the one defeated back in October. King’s did soon get some purchase in the proceedings, a scurrying break from Joe Mason taking the home side deep into Twickenham territory. A transgression from the defence and the referee signalled advantage, so with a ‘free play’ Kristian Cook speculated with a cross-kick which bounced dead in-goal. As the teams trudged back to the mark the referee signalled a scrum on the 22. Most strange. More King’s pressure ensued and with fifteen gone their patience was rewarded with a penalty for not rolling away which Tom Dugarin calmly slotted; 3-0.

The lead was to be short-lived as Twickenham hit back just three minutes later, a penalty for not releasing was kicked by the visiting full-back; 3-3. In truth the remainder of the half set the tone for the game, King’s tried some expansive rugby with Will Kibblewhite and Calum Williams conspicuous in their probing attempts to find space, but the black and red wall stood firm. Twickenham preferred to by and large eschew their backline and instead allowed their forwards to pound the fringes, their blindside nearly cracking the safe with a streaking midfield break. In was only in the very last play of the half that either side made anything stick, in this instance Will Kibblewhite catching a pass one-handed behind his back to slide over in the corner. It was a fine piece of individual skill from the winger playing his last game of the season, and capped off a good team try; 8-3.

A five point lead is barely worth commenting on and Twickenham would perhaps have been more concerned with playing into the wind in the second period. It soon became apparent they need not have worried as not only did the wind die down, but both sides showed they were more interested in playing the game with the ball in hand than the aerial tennis favoured by others. With four minutes on the clock it looked like Luke Minors might be on track to break his 1XV try scoring duck this season as he sped down his wing before a smart offload to Sam Young who sought to return the pass but in so doing saw the ball intercepted. The surprised but grateful openside nearly hit the jackpot as he hared towards the King’s try-line, and was only just hauled down by three tacklers like lions snaring an escaping wildebeest. In the event Twickenham had to be satisfied with another penalty, this one for offside, to reduce the deficit; 8-6.

Back came King’s and it was Luke Minors who came close again just moments later with a chip and chase which only just ran safe before he could pounce. King’s did win a penalty though and after a kick to the corner the screw was tightened another turn and eventually it was George Taylor who plunged over to extend King’s lead, a fitting reward after period of thoughtful linked play from King’s; 13-6. There was still only one score between the between the sides and King’s to their credit did try and keep their foot on the visitors’ throats, Taylor and Minors both continuing to carry strongly and find gaps in the Twickenham defence. Crucially though each foray ended in disappointment, a knock-on, a forward pass or a penalty conceded to release the steam in the pressure cooker.

Coaches at all levels talk about small margins, and it’s no less applicable in grassroots rugby than the highest echelons of the game as the last fifteen minutes of this encounter would bear testament. First King’s lost a player to the bin at a time when all hands were required to man the pumps. The result, the Twickenham battering ram finally breached the King’s castle doors and their full-back made no mistake with the extras; 13-13. Back to fifteen the game ebbed and flowed but with a shade under 5mins to play Twickenham were awarded a kickable penalty for a high-tackle (it seems likely given the new directive that authors of match reports will be writing that sentence more often than ever before in the coming weeks and months) and so it was the visitors led for the first time; 13-16.

Still there was time more drama though as King’s launched an all-out assault of their own and a, possibly slightly unfortunate, Twickenham player was pinged for playing the ball off his feet bang in front but no less than 40m out. King’s found themselves in the ‘Robshaw Dilemma‘ – do you try for the three and (probably) settle for a draw, or gamble? Kristian Cook tapped and went. King’s got into the corner, less than 10m out when the referee’s arm was raised and the hosts had another penalty. A lineout and a drive, tap and go, or scrum? The decision was the latter and regrettably for King’s it was an ill-fated choice as the ordinarily excellent James Sharpe was harried into a knock-on at his No.8’s feet. With that Twickenham won their own scrum and ran down the dwindling seconds until the curtain came down upon which they celebrated with unabashed glee.

So it was that a defeat was snatched from the jaws of if not victory, at least perhaps a draw. However, King’s had, until today, a proud undefeated home record and in an alternative course of things it would still be intact now. Twickenham were afterwards effusive with their praise about the manner and panache with which King’s seek to play the game and from time to time adventure will inevitably be met with disappointment. Well done to Twickenham who stay 4th but are now just 4pts from 2nd and a play-off place. They were engaging and lively company before and afterwards and in many ways we hope they hang around another year.

King’s now must lick their wounds before a trip to Warlingham who too will be a team smarting from defeat. The Mighty Warl are as far down on their luck as it is possible to be, Winchester putting 103 unanswered points on them at the weekend, so King’s can, and should, expect a reaction when they go to Hamsey Green on February 11th.