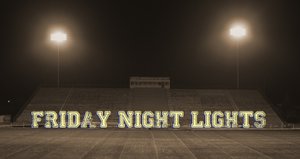 King’s had the pleasure of welcoming Old Tonbridgians to Dornan Fields for a Friday night treat, their request to switch venues and play under our floodlights warmly received on a fresh September evening.

King’s fielded the exact same backline from the previous weekend’s loss to Camberley but the pack had a few changes. The experienced Jonny Kiddle in for Joe Mason in the front row, Robert Clarke moving to No.8 from the row with Peter Januszewski promoted from the bench to partner the returning Daniel Staunton. The final alteration was the welcome return of Sam Young at blindside who is usually engaged with his school duties until Christmas but due to the game being on Friday could play.

Tonbridge were quickly into their stride and applied early pressure, in fact the majority of the first 20mins were played in the King’s half as penalties against the home side compounded by silly errors meant the hosts were hemmed in. There were glimmers of brightness with Luke Minors slipping the shackles more than once and a lovely outside break from Tom Smith but these were invariably followed by mistakes.

Tonbridge were on the scoreboard first thought a regulation penalty, their second kick at goal with the first having missed not long before. If anything King’s were guilty of trying to play too much rugby in the opening stanza, the inherent risk disregarded in pursuit of the much heralded and undeniably attractive rewards.

I can’t really remember much about the first try as I was not paying that much attention, but I can tell you it was scored by Luke Minors. The second came almost immediately from the kick-off, Daniel Staunton caught the kick off and carried deep into the Tonbridge half, his power and deceptive pace will leave many a defender on the floor this year. What followed was patient recycling and good rugby as King’s probed the retreating Tonbridge defensive line, Peter Januszewski with a strong carry into the tiring defenders before his offload set Harry Wakefield free to score under the posts. Kings led 14-3 as Gareth Stoppani completed the formalities.

As is so often the way, having scored at a try at one end one was promptly conceded at the other after penalties had allowed Tonbridge to set up field position under the posts. The accumulation of those penalties also led to a team yellow and Brett Williams had the chance for a 10min rest. A solid scrum followed by some good hands and Tonbridge slid over ten metre to the right of the uprights. The Tonbridge backs were a joy to watch all game and looked very good with ball in hand, their 10 and 15 looked very sharp and will test defences all season.

The half ended with King’s being awarded another penalty which Gareth Stoppani duly converted to put the tally at 17-10 in King’s favour. Given the territory that Tonbridge had they were probably aggrieved at the score line.

The second half was a similar affair with tiring bodies contributing to a disjointed game. Arguably it was King’s forwards’ superior fitness that told in this period as they continued to gain the crucial yards that the visitors could not, Robert Clarke to the fore as he was all evening. It was to Tonbridge’s credit however that they did cross again to tie the scoreboard up at 17-17, but King’s reply was prompt courtesy of a well worked try scored by debutant prop Bradley Bray, who enjoyed a solid debut, to put the home side back ahead at 24-17.

Again Tonbridge came back but King’s repelled them, but not always legally and another yellow for King’s meant this time Harry Wakefield got some time off. As a result King’s had to play the last 5mins or so with 14 men as Tonbridge sought one more score but this time they failed, and had to settle for a losing bonus point when the whistle was blown to signal a King’s victory.

Friday night lights was fun (as all 53 in attendance will attest), but as a club I think King’s know we need to get better, discipline is key and playing in the right places is paramount going forward. If those aspects, and the ability to maintain tempo and shape for the full 80mins instead of in ‘purple patches’ would make viewing a less nervy, and frustrating, experience and surely bring about consistently improved performances and results.