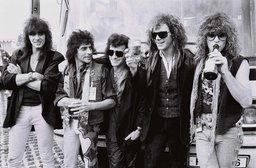 Not so much living on a prayer, as on the back of an honest day’s graft against a doughty and resilient Andover side who made life difficult but not impossible for the Old Boys.

A slightly condensed version of the report this week owing to a combination of factors variously including wanting to squeeze in a short half-term report and the unavoidable truth that the game itself was one that is unlikely to feature heavily in the memoirs of any of those who took part. So, anyway it went a bit like this……

Honours have been even between the sides in recent years, both teams have won two and lost two, with the home and away record equally poised, King’s losing 29-5 at Foxcotte Lane in the most recent meeting (April ’17) but having won 22-37 the season before, Andover going down 24-14 at Motspur Park last December but shellacking their hosts 0-47 in the penultimate game of 2015-16. Andover came into the fixture on the back of three defeats, two to the sides immediately above King’s in the league, but with King’s too having wobbled of late winning just one of their last three matches it was far from clear which way this one might go. Despite a cold night, the mercury having dipped to zero, the ground had held up well and showed a decent cover of grass, and at 1403 the sides began their charge across it.

The opening quarter was predictably cagey as the teams felt one another out but neither looked especially threatening, the closest either came was when King’s missed a penalty attempt on 11mins. The visitors looked best when the game moved quickly, their opposition when it did not and it was perhaps a telling admission on the part of one of the home players who let slip “they want to speed it up, we have to slow it down”. It was a prophetic remark as when King’s did get the ball wide they posed problems and as they manufactured an overlap only 10m out and with the line beckoning the home 13 felt he had little choice but to slap the ball down. A trip to the sin-bin inevitably ensued for the miscreant but Andover escaped punishment on the scoreboard. Just 6mins on and following a series of midfield drives, the ‘All Blacks’ were awarded a penalty which their kicker was on target with; 3-0.

In next ten minutes onlookers saw plenty of back and forth, but it was all pretty innocuous stuff in reality and took a bit of foul play to enliven proceedings. As scrum-half Will Slater took a quick tap penalty inside the home 22 his opposite man whilst perhaps not maliciously, but certainly carelessly, tipped Slater past the horizontal before bringing him to ground. Matthew Scott took the opportunity to wade in. Outcome, yellow for the tackler and a penalty, yellow for retaliation and penalty reversed. Andover cleared their lines, and with both sides down to 14 the score was unchanged when for reasons unclear the referee called time at 1441, having played just 38mins of the half.

With King’s now playing uphill against a heavier pack, behind on points and light a forward for the first period of the half, the omens were arguably a little ominous. Mercifully the players showed scant regard for all of the above and with just three minutes gone the ball passed through the hands of very nearly all the backline eventually arriving in those of Calum Williams who finished off a sensational move. Celebrations were cut short though as the whistler had apparently spotted an incidence of crossing. As it was King’s had to settle for a Gareth Stoppani penalty from the next play to level the scores; 3-3. They say you can’t keep a good man down and so it proved, Calum Williams refusing to be denied when from another slick move and one inside pass from right wing Tom Smith lurking on the left, he was to dot down close to the posts. The conversion was good; 3-10.

If Andover were disappointed to be behind, then their mood was not improved moments later when having missed a shot at goal, they were forced to defend again as King’s counter-attacked and won a lineout 25m out. Hooker Thomas Cobb did well to hit a leaping Rory Buckingham at the tail, he put the ball on a Gilbert Size 5 plate for Peter Januszewski who promptly engaged forward gear and barrelled through a series of would-be tacklers to cross close to left hand corner. The best kick of the game put King’s two scores clear; 3-17. This second try gave the hosts a shot in the arm and after ten minutes of sustained close-quarters pressure at set-pieces and in the loose their hooker twisted over for a try which was improved; 10-17.

There remained 15mins to play (20+ ultimately were) and in that time the ebb and flow that had characterised the middle period of the first forty was replicated again. Both teams chanced their arm, but neither could break the stalemate and as frustration mounted the referee marched both teams back for chat, King's then lost Barry Williams to the bin for a ruck infringement and with time almost up felt a home lock was also consigned to the cooler as his verbal outburst proved the proverbial straw that broke the camel’s back. Andover launched one last foray into the King’s half but it was parried and with that the final whistle went.

So, that was that. Whilst the home side may feel they should have had more penalties at scrum time, for the most part these were well contested albeit with the Hampshire side having the thin end of the wedge more often than not. A retreating scrum does not automatically equate to a penalty offence despite what generations of French referees may say. Ultimately King’s forwards were able to negate the threat from their Andover adversaries, and on the day the King’s backs had too much for theirs. Winning the second half 7-17 against the slope should not be denigrated and it was in the end a job well done. We shall look forward to hosting Andover and their followers on 7th April in what will be King’s last home game.

The culmination of proceedings on Saturday marked the half-way point in this campaign, the record standing at P11 W8 L3 is one the players and coaches may be proud of. The highs were six successive wins, including edging out a good Old Reigatian side, and a defensive record which at least away from home is as good as any (save for the odd point in two). Further positive aspects include player availability which has been generally improved on last season (well done to Tom Smith and Brett Williams who have played in every game, and to Luke Minors, Joe Mason, Thomas Cobb, Daniel Staunton, Harry Wakefield, Calum Williams and Gareth Stoppani who have done in 9 or 10) and the emergence of a handful of new faces who have each played important parts in the 1XV including Matthew Scott, Joseff Edwards, James Shaw, Peter Januszewski and Nicky Rawlinson in his first full senior campaign.

However, challenges remain and should not be underestimated. Whilst the win column is healthy, the points difference sits at a lowly +5 and the BPs just 3 – no team having fewer. King’s will need to find a way to translate pressure into points, ideally tries, if they are to kick on in 2018. It is worth noting that after 11 games in 2016-17 King’s had an identical win-loss record and 35 points. From that point to the end of season just 15pts more were achieved as the team tumbled to 8th where they were eventually to finish. If a repeat is to be avoided the players will need to show a collective resolve to train and play with the same, or greater, intensity from this point on.

On balance a solid B+ to here and plenty to celebrate, a further win before the Christmas celebrations this weekend would be ideal but doubtless Old Tonbridgians, conquerors of Old Reigatian on Saturday, will be doubly keen to get revenge for an early season reverse and to get their own party started.