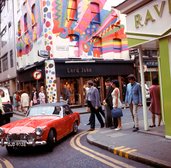 Swinging Into The 60s

In two compelling 40min rounds the contenders trade punch and counter-punch with the lead changing hands seven times before King’s take the spoils by the odd point in 63.

For the first away game of 2020 the 1XV packed their bags and made the relatively short but slightly awkward journey across South London, winding their way to the home of Beckenham RFC. In the first meeting between the sides in late September King’s had notched their debut victory at Level 6 as they dispatched today’s opponents 55-17. That result seemingly stung the 2018-19 L2SE champions into life and seven days later London Cornish felt the backlash as Beckenham won out 42-26. Alas, that was to be the last victory to date for the boys from Balmoral Avenue who have battled manfully but come up short in the intervening weeks. With 55pts still to play for however, the message from the home side’s coaches was surely that there was no better time for their revival to begin.

Another week, another new front row combination for King’s – Joe Mason alongside Nick Gardner with Funmi Oduniyi at tighthead whilst behind them there was another new pairing as Cam Keller retained his second-row berth and Dan Staunton returned after a week off. Completing the new look pack, a back-row of James Shaw, Harry Wakefield and Jack Griffin also ran out together for not just the first time in 2019-20, but ever. The three-quarters were broadly as they have been for much of the season albeit James Houstoun was required at 13 meaning Kristian Cook took the fullback shirt for the first time in his King’s career. Chris Baxter was the man in charge, and 15mins later than scheduled with proceedings delayed by the conclusion of the Beckenham v Hammersmith and Fulham ladies’ match, in front of a large and expectant crowd at 1415 play got under way.

When home lock James Blackmore caught the restart and barrelled headlong through the first King’s tackle to a roar of approval, it was plain the hosts were up for the fight. The fire in their hearts was, however, not quite matched by the cool in their heads as moments later an ambitious reverse flick was snapped up by Charlie Williams who cruised beneath the posts to open the scoring with Gareth Stoppani converting; 0-7. Undeterred Beckenham thundered back and with fewer than three minutes gone muscular winger Sam Hampson powered his way round the outside, also giving his kicker and easy two; 7-7. A number of spectators were still filtering pitch-side when looking to their right they saw their team rumble forward from a lineout in the visitors’ 22, and as the King’s defence rushed up Louis Richards nudged the ball in behind less than 10m out allowing his centre partner Sam Brooke the easiest of scores, once more under the poles; 14-7.

Beckenham chests were bursting with pride and with just ten minutes gone Brooke thought he was on his way to collect a brace, a tap tackle at full stretch from George Taylor the only thing preventing him doing so. Fool me once shame on you, fool me twice shame on me – and it was King’s who were left with egg on their faces two minutes later as a carbon copy of the second try, albeit this one from further out, saw Richardson provide the assist as Brooke scooped up another lofted kick to storm clear for number three; 21-7. With 28pts in twelve minutes it was perhaps no surprise that a period of consolidation for both sides followed, King’s being forced into their first sub as Charlie Williams withdrew, Tom Smith on in his place.

Having stemmed the blue tide King’s gradually went about getting a toe-hold in the proceedings, Jack Griffin providing plenty of impetus as he drove from the base of a scrum. When Beckenham conceded a penalty for offside King’s took full advantage of the free ball, a miss-pass finding Kristian Cook whose intelligent switch inside saw Gareth Stoppani over out wide; 21-12. King’s were now enjoying a period of ascendancy and with another penalty advantage being played George Jones followed Richardson’s lead and dinked over the top, James Houstoun collecting before his pass put Cook in, once more the angle defeated the conversion attempt; 21-17.

The kick was more or less Stoppani’s last contribution as a reshuffle saw Sam Young into the action at lock, Cam Keller to the flank freeing up Harry Wakefield, who had been busy defensively, to fill the vacant slot on the right wing. Whilst there were no more points there was still a touch more drama as captain George Taylor was dispatched to naughty step for an over vigorous tackle on winger Shaquille Palmer. King’s were made to work hard in the closing moments as the hosts sought to press their numerical superiority but they were to be denied and eventually frustrated when a knock-on concluded the half.

Whilst the first forty was the kind that makes defence coaches wake up in a cold sweat, there was no denying it had made for an entertaining spectacle. Whilst the home side had dominated the first quarter, King’s renaissance in the second meant the game was intriguingly poised as the sides lined up once more, the old boys now with the gusting wind in their faces. As fate would have it, just as lock Blackmore had featured in the opening exchange of the first period so he was in the second, although not as he would have wished, centre James Houstoun stripping the ball in contact as King’s started aggressively. With the visitors’ tails up, first Sam Young crashed into and through the midfield, before Jack Griffin carried on the good work and in a flash it was Tom Smith who burst clear to dot down wide on the left. George Jones’ attempted extras were not to be; 21-22.

For the first time in the match the visitors had the lead. It lasted all of two minutes before Reegan Tarbie snatched it back with a well struck penalty; 24-22. Those gathered were enjoying every moment of a pulsating game and the teams continued to grapple energetically with one another. Whilst the pitch may have been growing increasingly tacky, when the ball found its way to Harry Wakefield (King’s MOM) he defied the conditions and indeed the odds as from 40m out a burst of speed and some adroit footwork saw the flanker turned winger standing up his man in a narrow channel then step the full-back before finally being felled just a few feet short. The damage was done though as Wakefield’s offload landed squarely in the arms of Houstoun who put King’s back in the box seat; 24-27.

The yo-yo nature of the contest continued unabated and for ten minutes it was Beckenham who looked the more dangerous as they pressed hard, the breeze on their backs and the onlookers doing their bit too, 17yr old scrum half (and Beckenham MOM) Ben Murphy directing play intelligently with his passing and his boot. King’s resisted and then proceeded to string together three minutes of uninterrupted possession with seemingly everyone from 1 to 15 touching the ball in a fantastic phase of play which rather anti-climatically ended with a fumble. The baton had been passed back to the home side and they surged forward and arguably enjoyed a touch of good fortune as, having been turned over, they won back the ball from a position which looked from certain angles at least to be offside, but not in the eyes of the referee and the hosts seized their opportunity as Hampson again showed his worth breaking clear in front of the clubhouse to score, Tarbie once more on target; 31-27

Moving into the final ten minutes jangling of nerves would have been audible were it not for the cheers. Having won a penalty for not releasing, King’s came back at their hosts and a mere two minutes after securing his brace Hampson’s day was over, a yellow his punishment for the accumulated transgressions of his side. King’s pumped the ball to the corner and Nick Gardner made no mistake with his throw as the visitors launched a drive involving all the forwards and at least a couple of backs. It proved irresistible as Sam Young crashed over, King’s once more getting their noses ahead; 31-32. With no fewer than 5mins left to play it was far, far, from a done deal but the old boys retained possession winning a further penalty in the time remaining before scrum-half Will Slater put his laces through the ball to usher the end.

It had been a pulsating encounter – all 36 involved giving it everything and whilst far from technically perfect, with ten tries scored and the maximum seven points shared between the teams it was enough to warm even the coldest of hearts. Beckenham whilst naturally disappointed showed that they are not done yet and with fixtures against three sides in the bottom half – including matches against 11th place Cornish and 12th place H.A.C. – to come in the next four rounds a second, and perhaps even a third, win may not be long in coming. They were the most generous of hosts on the day and whatever their fate this season, their club will surely go from strength to strength given the calibre of people within it.

For King’s they return to Motspur Park this week and must themselves prepare to face H.A.C. who they prevailed against first time round (28-37) but at some cost physically as the Artillery boys showed they were not afraid to mix it up. Having gone down Horsham (55-24) and to Havant (11-65) since the turn of the year, the Londoners will doubtless be keen to get back to winning ways. A 2pm kick-off beckons for those who would like to see if King’s can once more record back-to-back successes in the league.

Meet at Beckenham at 1.30. Travel plans on FB