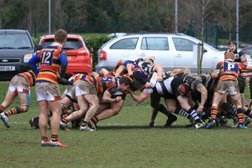 King’s Master the Conditions to Edge a Win at Farnham

The King’s 1st XV overcame a dangerous and spirited Farnham team effort to secure four points in a demanding away league fixture. A sticky playing surface and a strong westerly wind meant that the playing conditions were always going to be a significant factor, and it was King’s who ultimately made better use of the elements against determined opponents, who are fighting hard to hold their place in London 2SW.
The first half saw King’s playing into the wind – and an effective defensive performance restricted Farnham to just 6 points (a long drop goal and a penalty goal), answered by a successful penalty attempt by fly half Rory Jones.
King’s turned around with some confidence, but soon conceded a fine try (unconverted) to Farnham’s speedy right winger. The Old Boys fought back with an excellent try of their own, with Diggy Forshaw spinning and powering into space, and then offloading to George Taylor, who had run the perfect supporting line. George had to work hard to cross the whitewash and touch down, and Rory Jones added the extras to close the score to 10-11.
The game entered its decisive phase, and it was the accurate tactical kicking of half backs Kirby and Jones that made the critical difference, as King’s enjoyed better field position for most of the half. The side controlled possession sufficiently to earn two penalty goal attempts, both of which Rory converted, the second from 40 meters. So King’s carried an 11-16 advantage into the last 10 minutes – when they were reduced to 14 men by a sin-binning. Remarkably, there was not a single set scrum or penalty conceded during this period, and King’s stayed focussed and closed out the win comfortably enough.
The entire squad’s tackling was strong and effective throughout, with a huge (and legal) hit by replacement Barry Williams leading the way. The pack was dominant in the tight, with veteran Paul Calaminus making a full 80 minute contribution as hooker. Ultimately, it was tactical intelligence combined with vigorous and accurate execution that edged out always dangerous opponents.
There are now just four London 2SW league fixtures remaining this season. Effingham & Leatherhead’s 14-10 defeat of Winchester has surely sealed the promotion and play-off slots for Tottonians and London Cornish – though in what order? The two relegation slots will be contested by Farnham, Tadley and Portsmouth. However this league has a habit of throwing up weird results, especially in the late season; and our last fixture, away at Tadley, may well prove critical for the protagonists. King’s still have a shot at 4th place, and will need to maximise all opportunities – and bonus points - in the run-in, with four other teams in close contention.
Next Saturday, the 1st XV will entertain Old Reigatian, and we hope for a big crowd to support the team’s efforts. And maybe Spring will have sprung.
(There are some good photos on Farnham's site - which we thank them for - one is copied here)