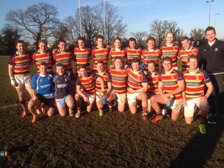 King’s Prevail in a Game of three Halves

King’s played their final London 2SW match of the campaign in front of a large, partisan and noisy crowd at already-relegated Tadley – where there doesn’t seem to be much to do for recreation on Saturday afternoons beyond building nuclear bombs at the adjacent atomic weapons establishment at Aldermaston, or watching rugby, munching barbeque and drinking beer. The conditions were sunny and breezy, and firm underfoot.
King’s elected to play down the slope in the first half. The early exchanges suggested an easy afternoon for the visitors, with the pack dominating possession in scrum and lineout, and the backs’ pace being more than sufficient to snuff out Tadley’s attempts to attack. The set scrum drive was sustained throughout the match, and hooker Harry Booth and tight head Brett Williams took advantage of the platform to take several strikes against the head. Accordingly, King’s established a territorial advantage, and eventually capitalised through tries by number 8 and captain Alex Humphries, in support of a powerful straight-running break by second row James Currie, and by scrum half Will Slater, rounding off sustained pressure on the Tadley line. 0-10.
A rather obscurely awarded yellow card temporarily reduced Tadley to 14 men, and King’s took full advantage by scoring with three contrasting tries in quick succession: prop James Williams powered over out on the left; left wing Tom Smith outpaced the cover at the climax of a slick series of handling movements; and flanker Diggy Forshaw twisted and turned at speed to open up a route to and over the try line. Fly half Rory Jones had by now found his goal-kicking range and direction, and converted the last three touch-downs.
With the score at 0-31 in their favour, the utterly dominant King’s team continued to attack the Tadley line as half time approached. However Tadley swooped on a handling error in the course of a rather ambitious move, recording a converted try before half time intervened. This put new heart into the home tram who, realising they had nothing at all to lose, started to attack from all over the pitch. King’s midfield defence temporarily lost its shape and cohesion, and Tadley’s spirted efforts, roared on by the crowd, quickly yielded two more converted tries, to bring the score to 21-31. Tadley’s efforts were orchestrated by their veteran out half Raymond, whose accurate goal kicking and well-directed and timed passing kept the home side’s momentum high. Some on the touchline said he was a 45 year old Bath veteran; others claimed him as a former London Welsh star of some 48 years (yes, LW did have stars once upon a fairy tale). In any event, Tadley’s recovery seriously threatened King’s push for four victory points to add to their 4-try bonus point. President Druckman could scarcely bear to watch, as he ranged the far touchline mumbling gloomy paranoid laments such as “It’s Weybridge all over again” and “We’re doomed.”
King’s finally restored their playing shape and poise, led by a fine high impact performance from the bench by 18 year old prop Ben Welham. King’s finally exerted strong and effective pressure on the Tadley backs, pushing the home side back onto the back foot. King’s could then switch to attack up the slope. Ben’s enthusiasm and speed around the park got him into position to connect with an offload, and he powered ahead and over the line for a superb forward’s try. Tadley answered with one of their own, but King’s had the final word, with George Taylor (now playing scrum half) sniping at speed round the base of a scrum to touch down near the posts during injury time. This score at the last restored King’s to a secure position; and it simultaneously enabled El Presidente to resume his usual calm, statesman-like demeanour. Jones converted both King’s second half tries, to bring the final score to 26-45 for King’s.
It had been a thoroughly entertaining, fluctuating contest. Both teams experienced some difficulty complying with the referee’s interpretation of the offside law, and the second half flurry of yellow seemed to make little difference to either side’s compliance. King’s clearly had the advantage in speed and skill, and it is to Tadley’s credit that they fought back so well to make the game properly competitive.
Share via
FacebookTwitter
https://www.pitchero.com/clubs
Recent news