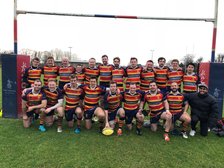 A different sort of win

After a dry morning in south London, the rain started to come down just as the teams were running out to warm up. A week of rain had made the ground underfoot unsteady, making it clear that the free flowing rugby from the past two games was unlikely to be seen today.

In Old Emanuel, KCS faced a team they had lost to across the other side of the A3, but also knew from seasons past the teams were well matched and a win was definitely achievable. Old Es won the toss and, with the wind coming relatively strongly from the direction of the clubhouse, decided to play into it in the first half. So it was Kings to get the game underway with kick off.

The only successful Kings restart (it went ten metres and not into touch), set a tone for the game. The Old Es receiver knocked the ball on, this was recovered by Kings and so no scrum was required (there are plenty of those to follow, not to worry). From here Kings started well, with the forwards doing the hard work running 1s and 2s and Kings dominating possession. Unfortunately the ambition to run the ball wide in the backs, and the slippery ball, meant several knock-ons from the men in red, blue and gold. A frustrated Kings side even took a shot at goal from a penalty to get on the board, but it was not be for the side becoming frustrated that their dominance had not yet been turned into points. Whilst the Emanuel defence held strong, the wind, and great pressure from the likes of Greig Blackie, John Walton, and George Thompson, meant Old Es struggled to really get clear of their lines.

Kings best chance in the first half came from an eight pick. Each man drew their respective player, and a miss pass to Francis Dwan saw him in uncontested space 5m out. Perhaps it was white line fever, perhaps the hangover from the night before, but a knock on saw him ensure no one else would be subject to getting dick of the day. The score remained 0-0.

Strong carries from Mark Prior, SEBASTIAN O'HARA, Alistair Cooper, and as always Fraser Houlder coming in from the backs saw Kings wearing down the Old Es side. Despite dominating play in this way Kings had to wait until 33 minutes to get their first points on the board. Forwards had done the hard work, and as the ball came out to the backs, clinical passing from Will Carter left a drift defence exposed for the Kings backline. A little step inside and the rushing defence was beaten, Kings under the posts for 5-0. A quick conversion and the scoreboard read 7-0 with little left to play in the first half.

The first half ended with no extra scores, so it was waters and a change of ends before Old Es got the second half underway.

The wind now against kings the game started the first period of prolonged time in Kings half. Defending well Kings looked comfortable without the ball in hand. Alas this was too good to last, temptation and ill discipline saw Old Es get a penalty in kick-able range. Kings caught slightly asleep the opposition 9, man of the match for the men in white, took a quick tap and darted through the off guard KCS defence. Stern words under the posts and a conversion later, it was all level at 7-7.

Kings continued to have success with running the ball, but a lot more territory for Emanuel saw them gain another kick-able penalty. This time they elected for posts and for the first time in the game took the lead 10-7. This spurred on the Kings side who then spent a lot more time in the opposition half. A strong run from Fraser Houlder, a pass that Old Es questioned the legality of (the referee assured us he was level with the player and it was just on the limit of flat), and a powerful support run from the new 9 Cam saw him get over the line for kings second try. The conversion missed, but King's ahead 12-10.

Aside from a lot more scrums there was little of note in the final twenty with the exception of two inventive ways to get out of your 22. Old Emanuel had a penalty 15 meters off their line on the 15m mark in from the right hand touch line. Instead of kicking into touch the kicker saw space on the left of the field in behind kings and a huge kick saw kings recover the ball in their own 22 and put the ball out on their own 10m line. Old Es cleverly gaining c.25 yards from what the kick might have got them had they gone for touch. Not to be outdone, a kings free kick under their own posts saw them tap and run to evade tackle and set up the first ruck between the opposition 22m and 10m line. Again gaining much better field position than the kick might have got them.

The final act of the half saw the opposition centre receive a yellow card for a late hit in the centres. The Kings captain informed that there was 1 minute to go was flustering, eventually a kick at goal was decided upon. The time was out, and the kick was good, so the final score read 15-10 to the home side.

It was a great performance from the King's team, against an opposition that was a step up from the previous two games. Man of the match went to Will Carter for Kings and the Emanuel Scrum half. Next week sees the twos head to Battersea who ran them all the way to the line in the previous encounter.