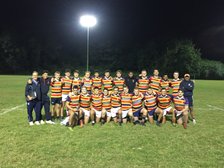 After a very competitive first half, the score was 10:5 to Kings. Riley finished off an excellent break down the wing by Kamal to score the first try in the corner. Jack Dean scored the second try from short range after a period of sustained Kings pressure. Kings played most of the rugby, but lateral running-lines and dropped balls in the backs kept points off the board. Just before half-time, Wimbledon broke through a gap in mid-field to set up the match for an exciting second half, during which Kings found their form and unleashed a flurry of six unanswered tries with Josh stepping and scrambling for his, Jack Jesty breaking through mid-field for his and an excellent No.8 pick-up by Felix off an attacking scrum released scrum-half Charlie to score his. Andrew Palmer ran a hard-line to burst through mid-field for a try and Freddie Bennett jinked his way through for his. Just before full-time Kings moved the ball from one wing to the other through six pairs of hands, including a tip-on by Josh which put winger Freddie Brett into the corner – ‘champagne rugby’. All the forwards worked over-time to give the backs an excellent platform to play off. Big thanks to all the boys, all the parents and supporters, Jotty Dhillon for his help with coaching and Jane Milton our physio. A great start to the new season. Cheers. Nigel Jeffery - U21 Coach.