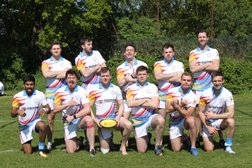 A hot day out at the Middlesex 7s..

Now in their third year the KCSOB Young Pretenders were raring to get back out on the sun baked paddock at the Middlesex Sevens this weekend just gone. With some delightful new kit and flair in abundance the boys were confident of repeating last years heroics of reaching the semi finals.

The day was set to be a tad trickier than expected with all levels of the tournament having some seriously strong competition. First up were to ferocious Gotham City Goats, previous winners of Brighton Sevens. It was a wake up call to the boys that in reality, you want to avoid rucks in Sevens rather than piling in to them… That being said it was a good game to get the rust off of those Sonny Bill out the back flicks and with tries from M. Beale, J. Dhillon & W. Alatov followed up by two conversions from M. Hill The Pretenders marched on to the next game having taken one from one and feeling pretty confident.

The turnaround times were quick between the matches and before they knew it the chaps were back out on the field, freshly sun creamed up ready to face London Welsh’s U23 side, The Griffins. If you want end to end Sevens try and find the clips from this game. Tit for Tat they went and went and went with the game being decided in the final play of the game as The Pretenders scrapped their way to the Griffins line to draw the game at 22 - 22. Tries coming from W. Alatov, W. Carter, M. Beale & J. Dhillon, who also got one conversion. This game took a lot out of the whole squad under the hot Richmond sun, something that would come back to haunt the the boys as they took on the final opponent of the group stages…

Barely 15 minutes (in-fact it was 15 minutes…) after coming off a gruelling game against the Griffins, the boys were back out to face Belsize Park. Going into the game at One Win and One Draw a win was clearly in the minds of the Pretenders as they looked to emulate last years unbeaten run in the group stages, alas it wasn’t to be. A slow start defensively and some miscommunication in attack led to misfires all over the park. Even some displays of individual brilliance from Francis “Get your camera out, I’ll run down this wing” Dwan and Josh “I’m quite quick” Dhillon couldn’t bring it back. The game ended up in a convincing win for Belsize at 29 - 12 with tries from F. Dwan and J. Dhillon - including a conversion - providing the only consolation.

It was then a wait to see if The Pretenders had done enough to make it through as Runner Up to progress in the Shield, unfortunately, 1 - 1 - 1 had left them in 3rd place and there would be no more Pretending that day. Being the charitable bunch they are however, they ensured that their close friends at RooBarBars could utilise some of The Pretender’s talent after they suffered a number of injuries. Mssrs. W. Alatov, J. Dhillon, W. Carter & M. Hill popped over to help them through to the final were they eventually triumphed with The Pretenders making up 4/7 of the Final winning team.

They’ll take that as a small victory. Onwards to Canterbury next weekend where The Pretenders look to once again shock the Sevens World. Win or Lose - They’ll make the news.

Thank You to our Sponsors

We are also proud to be supporting C.A.L.M this season. For more information, please head to https://www.thecalmzone.net/