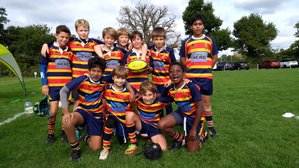 Kings U11s hold on against determined Wimbledon and Warriors squads eager for a rematch at our Kings festival.

With virtually the same opponents from last week’s utter domination of the Wimbledon Festival, the boys were sure to face squads which were determined to exact some payback this weekend. Happily the boys were up to the challenge, winning 2 and drawing 1, despite somewhat depleted numbers and longer matches featuring 10 minute halves.

As usual, errors, omissions or outright fabrications are your humble correspondent’s.

A very shaky start was rescued by a tackle at the try line from Kwame, an early Warriors score would have presaged a rather different day at the office. The teams settled down after a few minutes; Benjy livened up the proceedings with a well-taken kick (after which he then ran three quarters of the length of the pitch and tackled the receiver) but the score remained 0-0 at halftime. Shortly after the restart, Joven muscled through the defence on the line after some excellent phases featuring virtually the whole side, and in particular Squire as scrum half and captain. Charlie kept the pressure on with all kinds of possession until Benjy put the match to bed with a superb poached try (intercepting a pass in the Warriors’ backfield on their 15 (22 in the big lads’ game), and then again out of the scrum. Sound defence throughout, including Henry marking a boy at least twice his size.

A whirlwind of a match. Wimbledon had played immediately before, so perhaps the boys were guilty of a touch of complacency, especially after a pretty quick start. Emiliano took the first try off a great delivery from Louis. A rampant Nick was twice denied by the Laws: harsh, but fair (have to wait until the U13s Nick!). Joven extended the lead with a try up the middle off of an excellent ruck from Alex and Kieran pushing Wimbledon off their ball. Wimbledon responded, running the length of the pitch to make it 2 – 1 at halftime. The half had been marred somewhat by repeatedly losing the ball out of our own scrums, something that would haunt the lads as the day progressed. Hooking practice is prescribed for everyone.

But the match was just getting started. Benjy made it 3 – 1 just after the break. Wimbledon came back again and again only to be stopped at the try line three times with notable tackles from Henry (photographic evidence shows another starkly implausible match-up), Alex, Squire and Nick. Wimbledon finally broke through to get to 3 – 2, at which point Benjy decided to make the result sure from around the halfway mark (neutral observers might point out that as other teams quickly learn to bunch around Benjy, there may be easier ways to score …). Several probing runs from Charlie followed. Kwame then broke through to make sure of the result, cheekily downing the ball between the (virtual) posts. The resulting restart saw Wimbledon nip a consolation try, running onto their own kick as time expired for a final score of 5 – 3. Phew.

A tough, tough match. The boys were running a bit ragged and it showed. Scrums continued to be problematic (admittedly for both teams, perhaps the usual decision to take the scrum over a re-kick after a botched kick should be revisited). Kieran saved a certain try at the line, but Warriors took a long distance try later in the first half, exploiting a slight narrowness to our formation as the half went on. Recalling the heroics of last week, the boys weren’t too worried about being down at the half. Midway through the second half, patient working up the pitch saw Emiliano awarded a penalty try after a very high tackle (he scored anyway, but the referee had already blown his whistle for the foul). The boys’ war cry on the restart—something they picked up in their travels up North last year—produced the expected panic in the Warriors’ line, but there wasn’t quite enough time to score again: full time was blown with a call of “massive confusion” from the referee after four consecutive knock-ons going each way. An entertaining match and a fair result.

Man of the Festival goes to Henry: Bravery against the BIG guy in the first match lead the way for the team to follow.